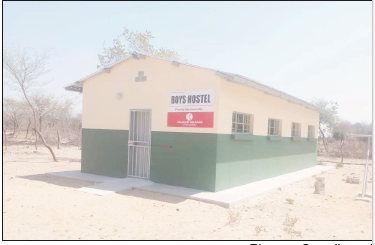 KALAHARI Holdings has responded to the plight of the pupils of Oshamukweni Combined School in the Ohangwena region, through upgrades and the construction of school hostels and ablution facilities to the tune of N$1,5 million.

Situated 45 kilometres east of Okongo, the school of 333 pupils made headlines in 2021 when the media exposed the deplorable conditions in which pupils were accommodated, with many sleeping in shacks and on beds made of sticks stacked together.

Speaking during the official handover of the building and facilities, chairperson of Kalahari Holdings Martin Inkumbi said the group of companies learnt about the living conditions of Oshamukweni pupils through the media in January 2021.

“Our team, with the help of the Directorate of Education, Arts and Culture of the Ohangwena region took a familiarisation trip to assess living conditions at the school, which evidently was not conducive for pupils.

“Following that visit, management took a decision to give a helping hand and submitted a proposal to the board which subsequently approved N$1,5 million towards the construction of, the boys’ and girls’ hostel, with 32 proper beds each, and ablution facilities accommodating 64 learners,” said Inkumbi.

Ohangwena governor Walde Ndevashiya said although the region is classified as poor, the initiative will go a long way in improving the learning environment for pupils.

“This donation is highly valued, and will contribute a lot towards national and regional development,” said Ndevashiya.

Oshamukweni Combined School principal Lineekela Nangolo, took issue with some of the parents present at the handover event, about the state of their children.

“Parents, your children are sent to school in bad conditions, most of the them are on social grants. You are receiving money on their behalf but the children are in such states. Please do better,” Nangolo said.

He said the school was opened in 1976 but was later closed during the war, reopening in 1981, at which point it did not have a hostel.

However, shacks were erected after some children had to travel distances of more than 15 kilometres daily.

“There were no proper hostel structures, so parents started sending their children to school with tents to sleep in for the duration of the week. Eventually, as the pupils became more, shacks were were erected for accommodation,” he said.

Swanu says war veteran benefits not only for Swapo