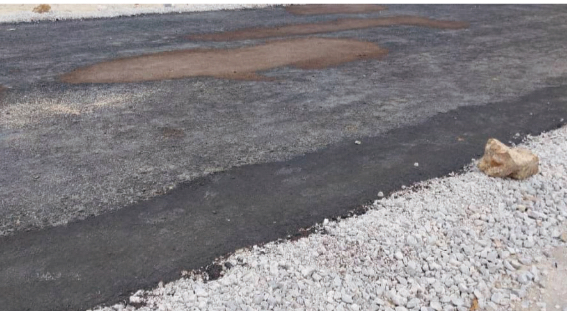 NKURENKURU residents have expressed disappointment with the work done so far on the upgrading of an 800-metre gravel road at the town of Nkurenkuru to bitumen standard, saying the work is substandard.

Community activist and president of the Freedom March Movement, Modestus Kasoma, last week said the company contracted to do the job needs to be qualified and equipped to carry out the project.

He said although he is not a trained engineer and does not know anything about road construction, it is evident from work done that it is substandard.

Kasoma said the company seems to have inadequate machinery and equipment to carry out the project, which he says raises questions about how the company was awarded the project.

This is the first tarred road construction being carried out by the Nkurenkuru Town Council.

Residents took the issue to social media, denouncing the work done on the road so far, where some says it is being done out of the scope of work and without following the standards and using the right equipment.

Infinity Investment Engineering JV Paul and Lucy Investment CC is the company contracted to carry out the N$3,9-million project. The site handover was done in August last year.

Deka Consulting Engineers are the consulting engineers on the project and started ground works in October last year.

The scope of work was to upgrade the 800-metre gravel road from the traffic cicle to the Roman Catholic Church and the Nkurenkuru health centre to bitumen standard.

The project is 60% complete.

The chairperson of the Kavango West Youth Forum and a member of the National Youth Council, Willem Kotokeni, recently told The Namibian that the leadership had taken note of the concerns community members have raised regarding the ongoing construction of the road.

“I hope all necessary steps will be taken to ensure the project is up to standard,” said Kotokeni.

He urged the Nkurenkuru Town Council to maintain quality to avoid redoing projects.

“We are also urging the contractor to return on site, with all the necessary equipment, tools and materials for the project to be completed as per bid specifications.”

Nkurenkuru Town Council’s chief executive officer Petrus Sindimba on Tuesday said he is aware of the residents’ concerns. However, he said the people should understand that the project is not yet complete.

“Please be informed that the project is not yet completed and handed over to the council. The contractor is still busy with the base collection, and it is not yet done, and they are still left with three layers,” said Sindimba, urging residents to be patient.

He added that the council understands the frustration caused by the delays in completing the project.

The deadline for the project was last month, now the council has given the company an extension until 17 February to complete it

Efforts to get a comment from the contractor were unsuccessful, as the project engineer did not answer calls to his mobile phone.

Namibian bangers for the upcoming summer