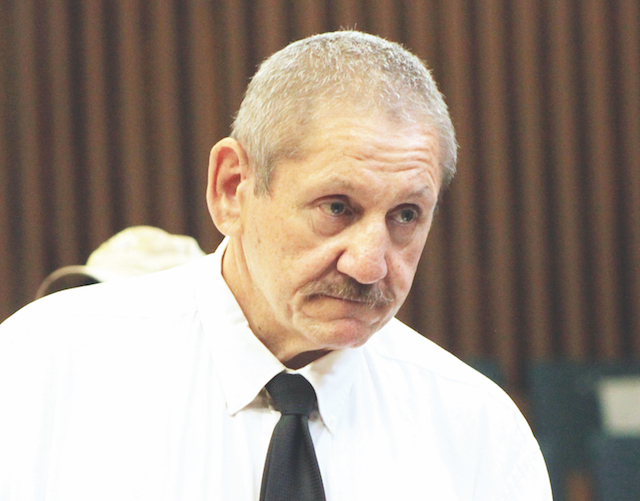 A CONFESSION that double-murder accused Ernst Lichtenstrasser made to police officers at Walvis Bay in May 2019 is false and was a repetition of information that officers had given to him after his arrest, Lichtenstrasser told a judge in the Windhoek High Court yesterday.

“During these very long interrogation sessions I was conditioned what to say,” Lichtenstrasser said when his defence lawyer, Albert Titus, asked him about various similarities between the contents of the confession that he made and evidence heard during his trial before judge Christie Liebenberg.

Lichtenstrasser (61) said police officers who had been questioning him in connection with the killing of the two top executives of the Namibian Institute of Mining and Technology (Nimt) at Arandis in the Erongo region on 15 April 2019 had been putting pressure on him to make a confession.

He said the police officers also told him repeatedly how Nimt executive director Eckhart Mueller (72) and his deputy, Heimo Hellwig (60), had been gunned down at the entrance of the institute’s head office and showed him photos of the crime scene.

He repeated that information when he made a confession to police officers at Walvis Bay on 15 May 2019, Lichtenstrasser told the judge.

One of the police officers involved in the interrogations told him that if he cooperated with the police by confessing, he could say his responsibility was diminished and would probably face a prison term of no more than eight years, he said.

The pressure exerted on him pushed him past breaking point when threats were made that his wife would also be arrested for allegedly having been involved in the slaying of Mueller and Hellwig, and he then agreed to confess, Lichtenstrasser added.

He said in making the confession, he repeated what the police officers had been telling him over many interrogation sessions and added some fictional elements to that.

But before he returned to an office where he had been questioned and where his confession was recorded, he asked an officer escorting him to end his life by shooting him. He made that request, which the officer refused, because he did not want to go back to that office, Lichtenstrasser said. “I meant every word of it.”

In his confession, Lich tenstrasser gave a detailed account of the killing of Mueller and Hellwig.

He said after he and his wife had been involved in a quarrel at their home at Otavi, he drove to Arandis, spent the night close to the town, and the next morning followed the car in which Mueller and Hellwig travelled when he saw the vehicle arriving at Arandis.

He approached the two men when they were at the entrance of the Nimt head office, and after Hellwig had asked him in German what he was doing there and Mueller had told him to leave, “in his voice that everybody hates […] then I lost it”. Lichtenstrasser said he was acting automatically when he shot the two men: “I did not see faces anymore and now I was on an operation.”

He followed ‘a Mozambique drill’ when he shot Mueller and Hellwig, directing shots at their bodies first, followed by shots to their heads, he told the police.

“I might have exaggerated with Mueller,” he added. That remark, Lichtenstrasser said during his testimony yesterday, was a repetition of what a police officer had said to him during interrogations, because Mueller had been shot more times than Hellwig. He said the exchange between him and the two men that he recounted did not happen. “Well, they wanted a confession,” he said. “I had to make up something. […] That is a fabrication.”

He also told the judge: “What I’m so-called confessing here is not the truth.” Having completed his evidence in chief yesterday, Lichtenstrasser is set to be cross-examined by deputy prosecutor general Antonia Verhoef when the trial continues today.

A global recession could occur in 2023 – IMF