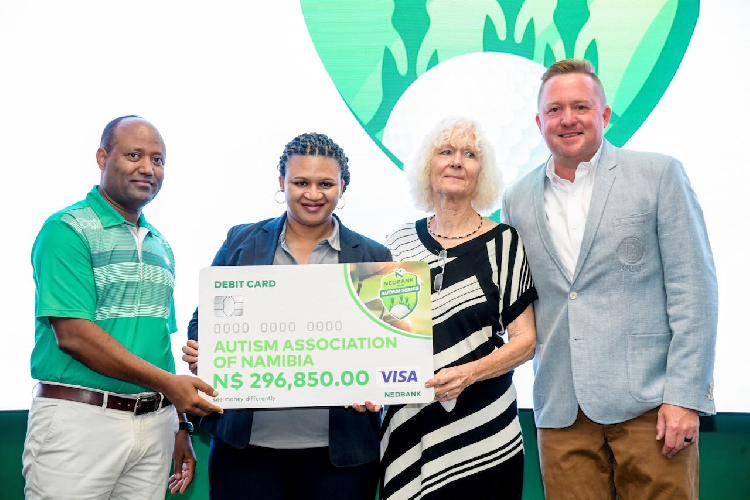 THE Autism Association of Namibia (AAN) welcomed the N$300 000 generated through the 2022 Nedbank for Autism Series, which concluded on Friday after a 10-round golf tour countrywide.

The series, aimed at creating awareness for the autism organisation, raised a whopping N$296 000 from pledges and donations made during its duration. An additional N$24 000 was donated by guests at the official prize-giving ceremony held at the Nedbank Campus in Windhoek.

“This was a bonus, as it enabled us to meet the communities and find out what is needed on the ground.”

Dillmann stated that the association will continue with its project of making resources from recyclables in the various communities in 2023.

This year’s series saw 559 players take part, with Kiewiet Dreyer from Mariental winning after beating nine other qualifiers with a total score of 44 points at the final.

Nedbank Namibia has for the past three years dedicated to sponsor the autism series as part of solving challenges in society, said the banking institution’s executive for private wealth and bancassurance, Biniam Ghirmatsion.

“The Nedbank Autism Golf Series created a platform to enhance awareness of the needs of people living with autism across the country,” he said.

“As part of the programme over the years, one- and two-day courses have been offered countrywide to create understanding and acceptance through teaching, training, and networking, to improve knowledge within the greater society, and to foster participation on all levels,” the senior official continued.

“Petra Dillmann, the director at the Autism Association of Namibia, shared that in some instances the participants travelled 250km or more to join the courses,” Ghirmatsion said.

“Events such as the Nedbank for Autism Golf Series have a significant and long-lasting impact on families in our communities.

“There has been excellent brand equity built up since the inaugural events, and we wish to see the series continue strengthening both its impact in our communities and influence in the future,” said Ghirmatsion.

Pensioner (92) among five who take their lives