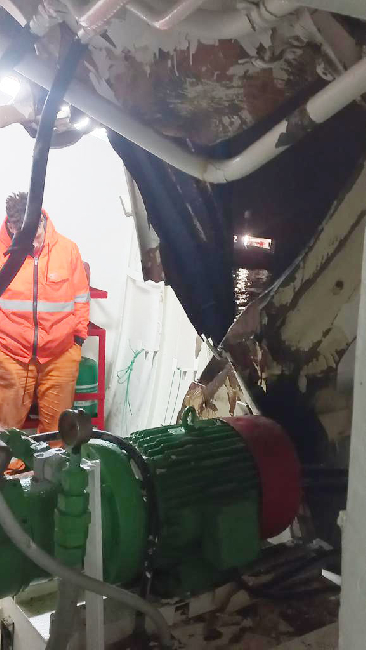 Some 140 of them were on board the Fishrot-implicated horse mackerel freezer trawler the MV Heinaste, which has been renamed the Tutungeni.

The remaining 28 fishermen were on board the hake trawler Erica, belonging to Hangana Seafood, which is a subsidiary of the Ohlthaver and List (O&L) group of companies.

“It was an unfortunate accident that happened at slow speed in thick fog and the dark of night,” he said.

There were no fatalities.

“All crew on both vessels are okay, and we are fortunate that all are safe and we have no casualties. The damaged vessel can be repaired,” he said.

Hitula said the Tutungeni, which is the bigger vessel, accompanied the Erica to the port to ensure both reach it safely.

The Tutungeni has been at the centre of several events since its arrival in Namibia in 2015.

Arcticnam Investments was one of the five joint-venture partners in the vessel with Namibian companies Sinco Fishing and Epango Fishing, and the Icelandic company Samherji HP.

The Namibian companies had a 51% shareholding in Arcticnam, and were allegedly swindled out of the deal by the Icelanders after spending over N$200 million on purchasing the vessel.

The vessel was impounded in 2019 as part of the ongoing Fishrot corruption case.

It was later sold to Tunacor under questionable circumstances as it is part of the evidence in the Fishrot case.

O&L spokesperson Roux-che Locke yesterday said: “The Erica was involved in an incident that happened last week while out at sea. Our first priority was the safety of our crew and captain, and we are pleased to confirm they are all doing well.”

The company has since launched an investigation into the incident.

This is not the first time that a vessel belonging to Hangana Seafood was involved in an incident at sea.

In 2020, one of the company’s fishing trawlers, the Resplendent, sank in the Atlantic Ocean, along with its captain, Carlo Gordon.

Neither Locke nor Hitula could elaborate on the estimated cost of damage to the vessels.

The Tutungeni was left with a big hole on its side.

Both vessels had fisheries observers on board.

The observer on board the Erica was said to be hurt, slightly injured.

He is currently recuperating at home.