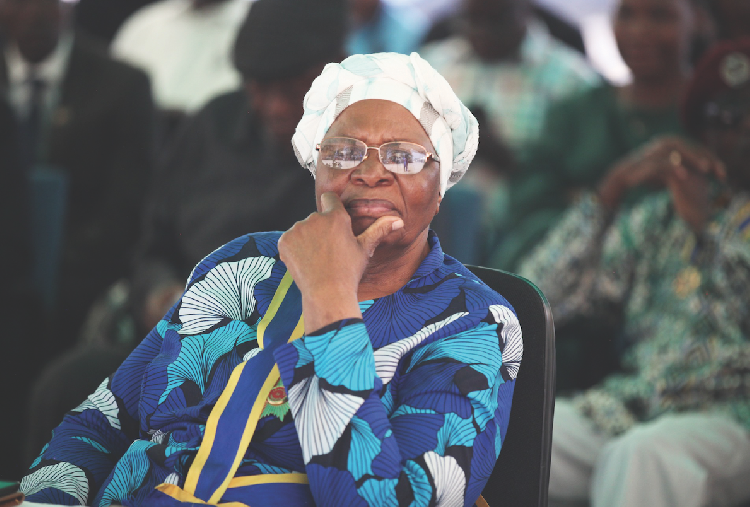 FORMER campaign manager for Swapo vice president Netumbo Nandi-Ndaitwah, Kaire Mbuende, has defended a gift of four Bonsmara heifers, a bull and two oxen donated to her and branded as bribery by some Swapo members.

Mbuende said the gift of livestock is a common Namibian cultural practice showing goodwill to those who have achieved something notable.

Mbuende presented the donation to Nandi-Ndaitwah at her special thanksgiving ceremony at her traditional homestead in Ohangwena region three weeks ago.

The thanksgiving ceremony was made to, among others, celebrate her survival of a fatal accident five years ago, as well as to celebrate her 70th birthday.

The donation is now perceived by some people in Swapo as an attempt to buy political positions if Nandi-Ndaitwah is to win the 2024 presidential elections.

Some Swapo members raised concerns on various Swapo WhatsApp groups questioning whether the donation was genuine or it if it was an attempt to buy political positions.

“The idea of donating heifers to VP after winning at congress but not before does not sit well with the politica; image of the candidate, especially now. It can be misinterpreted and mispresented as bribery or buying positions in advance,” said a member on one of the party’s WhatsApp groups.

The member went on to say: “We should in fact do some critical analysis here so [] can prepare how to handle it in 2024 because it will surely surface.”

Another group participant added: “Currently there r allegations of some people having donated cattle to the current president after the 2012 congress’s to become members of Cabinet and here its being done again.”

Another member said: “I am sure the idea of donating cows was sincere and well intended, however we should be vigilant on how we do things so that we don’t unnecessary put our VP in situations comrades, in my view this comrade have a point.”

However, Swapo secretary general Sophia Shaningwa responded to the conversation last week that the party has already discussed issues pertaining to donating to party leaders.

Mbuende, who presented the cows to Nandi-Ndaitwah, said the donation was coordinated by former high commissioner to the United Kingdom Steve Katjiuanjo.

According to Mbuende, some residents of the Omaheke region contributed towards the cost of buying the cows.

In a short video clip posted on social media, Mbuende is seen presenting the cows loaded in a truck, while Nandi-Ndaitwah is seen dancing and remarking: “Four Ns, four heifers, fourth president.”

Speaking to The Namibian on Saturday, Mbuende said he was disappointed by those who believe the donation was made in exchange for political favour.

“Somebody who takes himself seriously like me, I don’t think that I value myself that I have a contribution to national building, if any leader feels that I can make a contribution, he will appoint me to any position as has been over the years. If he doesn’t think that way, so be it,” he said.

“I have known comrade Netumbo for over 48 years. We have had a close relationship based on shared values and it will be insults on my side if I could attempt to even try and buy positions. Netumbo is not cheap. She is not corrupt to be bought by heifers,” Mbuende said.

He added: “For anybody to suggest that, it only shows the sick minds that some of our citizens unfortunately represent.”

The former deputy minister of foreign affairs and ambassador said those who see the donation as a bribe should be condemned with the contempt they deserve.

Nandi-Ndaitwah said the donation is not an attempt to buy political positions because it came from the community of the Omaheke and Otjozondjupa regions.

“How will I have the whole community of Omaheke and Otjozondjupa as ministers? It did not come in the name of anybody and it was given to me to feed the nation,” she said.

However, Nandi-Ndaitwah said she is challenged in not having a place to keep the cows because she does not have a farm south of the redline.

Despite this, she expressed her appreciation for the donation.

Speaking to The Namibian yesterday, Katjiuanjo said the four Bonsmara heifers and the bull were donated by him and Rodgers Kauta.

The two donated oxen were bought from Omaheke farming communities through resources raised by a number of well-wishers for the Ndaitwah family, from the Omaheke and Otjozondjupa regions, he said.

The former diplomat said the aggregate value of the oxen is approximately N$45 000.

“Needless to add these donations are not the first and will not be the last. I am reliably informed that throughout the campaigns donations of cattle and in other forms were made by supporters in virtually every region,” he said.

Most of these donors are people without political ambitions but [who] believe Namibia needs a leader of Nandi-Ndaitwah’s calibre, he said.

Many Namibians have commended them for the gesture and understand it as part of a collective contribution to strengthen Swapo and to ensure that Namibia is in good hands come 2024, and on the path to national integrity and ethical conduct, he said.

“It is a common practice informed by our centuries old cultural norms to make a contribution in kind to friends, families and communities as a way to ease the burden of hosting events such as funerals, weddings, celebrations and commemorations,” he said.

“Unfortunately, we are dealing with a person of integrity, who in my view cannot be bought and cannot sell political positions at any cost.

“We, the donors, do not have political ambitions, but we want the best for our country. That is why we are among the staunch supporters of the vice president. We have supported her re-election and we will support her to be the next president of the country,” he said.

//Kharas to withdraw from Association for Regional Councils

Cricket bonanza in store – The Namibian