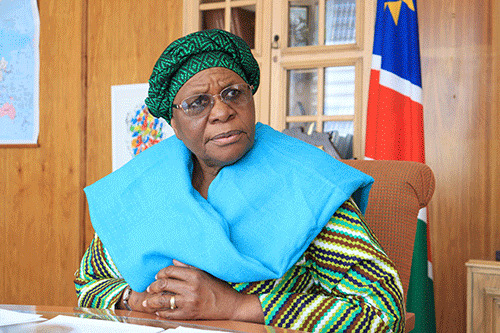 NAMIBIA is now the chair of the African Union (AU) Peace and Security Council for the month of November.

The Ministry of International Relations and Cooperation on Monday hosted the 1 119th meeting of the African Union Peace and Security Council.

The country has contributed its share towards the promotion of peace and security on the African continent. Minister of international relations and cooperation Netumbo Nandi-Ndaitwah, who is the chairperson of the Peace and Security Council, said Namibia finds this responsibility of chairmanship important.

“Mostly at a time when the continent is faced with multiple socio-economic and governance challenges and experiencing a surge in conflicts, and the menace of terrorism and violent extremism,” she said.

According to the AU, the council adopted a communique on the deployment of the SADC Mission in Mozambique (SAMIM) at the 1 062nd meeting, in which the council reaffirmed the African Union’s commitment to Mozambique, SADC and the SAMIM.

“This is to enhance coordination in support of efforts to counter terrorism and violent extremism, and to restore security in the Cabo Delgado province of Mozambique,” she said.

In the same communique, the council also commended Mozambique’s commitment to addressing the threat posed by terrorism and violent extremism in the Cabo Delgado province and other affected areas, Nandi-Ndaitwah said.

“Thus, I want to assure our sister country of Mozambique that the support of this council remains towards that goal.”

While Africa has experienced a rise in the number and expansion in the geographic area of conflicts during the past decade, perhaps there is no other form of violent conflict on the continent that has witnessed a greater surge than terrorism, she said.

“Today, the threat of terrorism has not only engulfed the Sahel, a region currently mostly affected by this menace but also reared its ugly head across the continent,” Nandi-Ndaitwah said.

Even the southern African region, which has the least burden of violent conflicts relative to other regions of the continent, is not spared from terrorism, she said.

Since the deployment of the SAMIM, which is working alongside Mozambique’s army, it contributed significantly to facilitate the liberation of territories in the hands of the terrorist group and the degrading of the threat posed by the group.

“Namibia wishes to extend its appreciation to the member states that contributed troops and personnel to SAMIM and for the cooperation extended to SAMIM by the government of Mozambique,” Nandi-Ndaitwah said.