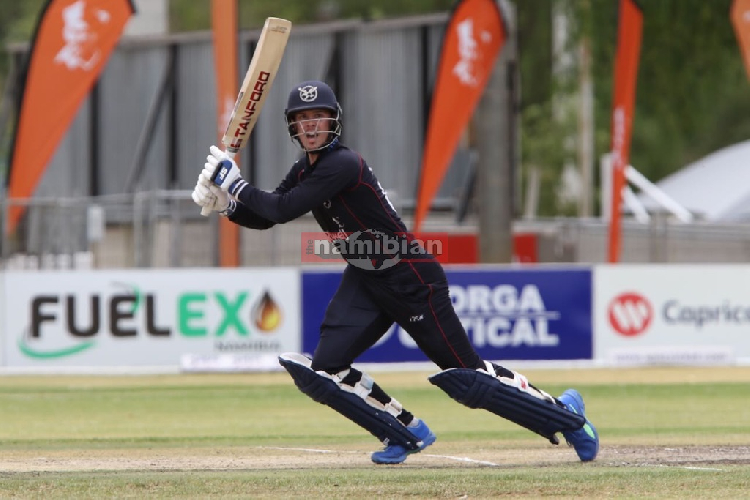 NAMIBIA will be out to get their Cricket World Cup League 2 Trinations campaign back on track when they take on Papua New Guinea at the Wanderers ground today.

Namibia started the Trinations series with an impressive eight wicket win against PNG last Friday, but since then the United States have taken charge with two comfortable victories. On Saturday they beat Namibia by 71 runs, while they beat PNG by six wickets yesterday to strengthen their log position.

The USA are now third on the log on 33 points from 34 matches, while Namibia are five points behind in fourth place, although they have numerous matches in hand on the leaders.

With the top four teams progressing directly to the final qualifier for the 2023 World Cup, Namibia are still well placed, but the UAE are breathing down their necks on 27 points.

On Sunday, the United States set a competitive total of 244/8 and then tightened their grip on the game with some accurate bowling as they dismissed Namibia for 173 to complete a comfortable victory.

After being sent in to bat, the USA got off to a steady start and then gradually built a big total as all their top order batsmen got amongst the runs.

Steven Taylor and Sushant Modani put on 44 for the first wicket before Ruben Trumpelmann dismissed the latter for 15, and when Bernard Scholtz dismissed Taylor for 23, they were two down for 54.

Monank Patel and Aaron Jones added 43 runs for the third wicket when Patel became another Scholtz victim, dismissed for 33, but with the total at 97/3 halfway through their innings they were well set.

Aaron Jones and Gajanand Singh added 40 for the fourth wicket before Jones was dismissed by Trumpelmann for 35, but Singh stepped up their attack as he took centre stage with a fine innings.

He was eventually dismissed by Lungameni for 66 of 65 balls (8×4, 1×6), and along with some sturdy contributions further down the order, the USA reached a competitive 244/8 off their 50 overs.

In Namibia’s innings, Divan La Cock was dismissed cheaply for 8, but Michael van Lingen and Lohan Louwrens revived the innings with a 41-run partnership, but the USA struck back with three wickets in five overs with the dismissals of Van Lingen (23), Louwrens (25) and Nicol Loftie Eaton (1), leaving Namibia struggling at 72/4.

It didn’t get better as Jan Frylinck was dismissed for 10 to leave Namibia at 94/5 halfway through their innings, and with the USA bowlers taking charge more wickets fell at regular intervals.

All of the USA bowlers got amongst the wickets, with Saurabh Netravalkar, Ian Holland (2/27), Steven Taylor (2/41) and Nosthush Kenjige (2/28) taking two each.

Yesterday, the USA gave another polished performance as they dismissed PNG for 149, before scoring 152/4 off off 30 overs.

It was once again a fine all-round performance as all of the USA bowlers got amongst the wickets, with Netravalkar (2/19), Kenjige (2/18), Jessy Singh (2/39) and Nisarg Patel (2/26) taking two wickets each, while Assad Vala was PNG’s top scorer with only 29 runs.

Tigers will recover: Akwenye – The Namibian