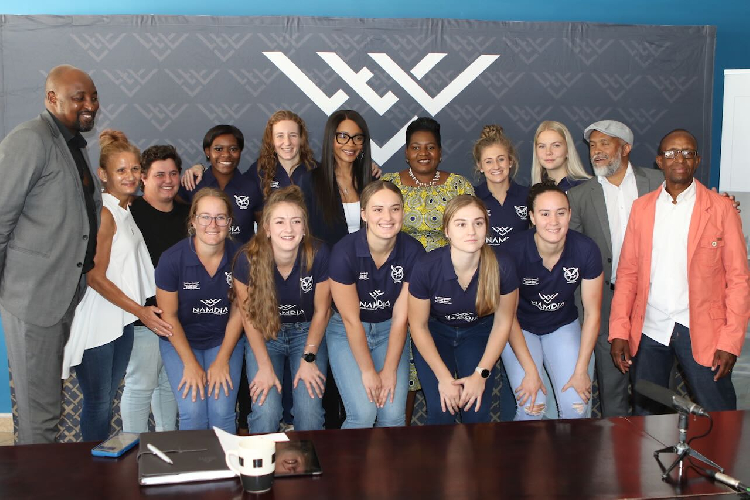 NAMDIA yesterday announced a sponsorship of N$445 000 for Namibia’s women’s hockey team which will enable them to compete at the Afcon 5’s tournament in Ismailia, Egypt from 10 to 15 December.

At a press conference at the Namibia Sport Commission yesterday, where the team received their national colours, Namdia PRO Beverley Coussement said that Namdia was proud to be a sponsor of the women’s hockey team.

“Namdia has been an avid supporter of hockey and all sports codes in Namibia. We have invested more than N$30 million in Namibian sport and for an institution that is quite young, that is remarkable,” she said.

“We believe in our women’s team, which is ranked ninth in the world, and number one in Africa, and we are very honoured to be partnering up with you again,” she added.

The deputy minister of sport, Emma Kantema-Gaomas thanked Namdia for their support.

“Namdia has really come on board to assist the government and the sports fraternity, to make it possible for us to compete, because as we always say, we as government cannot do it by ourselves,” she said.

“I would like to reiterate the commitment from the ministry to provide an enabling environment for sports to thrive and for us to continue developing and to promote sport. We are intensifying our efforts to professionalise sport and we are looking at ways as to how sport can be one of the economic contributors to the nation,” she added.

The president of the Namibia Hockey Union, Reagon Graig said that Namibian hockey was ‘in an extremely healthy state.’

“I’m extremely proud of our national teams – we have performed way beyond expectations for a country with such a small population. We are becoming very well known in Africa and even around the world, and Namibia’s name has been put on the map because of their efforts,” he said.

“We are an amateur sport and there are a lot of costs involved in competing internationally, so I really want to thank Namdia, we depend on this and are extremely grateful for this sponsorship,” he added.

Graig said hockey 5s was following an international trend of other sport codes and should be supported.

“Hockey 5s is following an international trend, if you look at the other sports codes like T20 cricket, or indoor futsal with football, where you have smaller teams, and the facilities are not so big or expensive, so I think from a development perspective, it will be good for our hockey community to support 5s,” he said.

The Namibian team is as follows:

Erwin Handura is the coach, Kimber le Roux is the manager and Maryke Short is the video assistant.

Namibia will compete against Egypt, Zambia, South Africa and Kenya.

The top three teams at the tournament will qualify for the inaugural Hockey 5s World Cup in Muscat, Oman in 2024, and Handura was confident of success.

“This is a new competition for all of us so everyone has an equal chance, but we are aiming to win the gold medal. The top three teams will qualify for the World Cup, so there is no way that we wont make the top three, but we are going for gold,” he said.