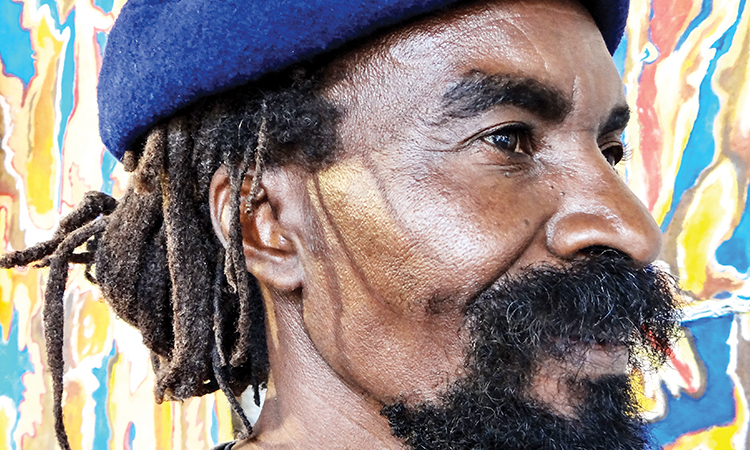 CATTLE remains king, women are worth celebrating and Hendrik Witbooi is a young man in Alpheus Mvula’s ‘Triple’, recently on display at the Franco-Namibian Cultural Centre.v

The consummate exhibition, which draws its name from its selection of sculptures, paintings and prints, as well as from the trios in a number of its compositions, opened on 4 November and hosted Namibia’s first lady Monica Geingos as the guest of

“It’s very important to support artists, local and even non-local,” says Mvula. “During this pandemic it was very difficult. Even the first lady pointed out that art is something that needs to be supported in this country.”

Mvula’s sculpture of Geingos takes pride of place in the large gallery, seemingly peering over the herd of soapstone, white marble and serpentine cattle, which are the veteran artist’s signature.

“When I was young, I used to look after the cattle of my father, so I regard cattle as people, as human beings and as leaders because one or two cattle can lead other cattle,” says Mvula. “So that made me, as an artist, work my artistic statement out much better. Every day, I’m depicting cattle out of stone, print, painting and using other mixed media.”

In ‘Triple’, run through with Mvula’s colour motif of white, orange and blue, Owambo kings are rendered bulls depicting their core nature. Mvula also depicts traditional royal burial rates in a spare lithograph, while a wooden kraal harks back to customary Owambo homesteads and cattle enclosures.

Celebrating culture, cattle, kings and including some commentary on climate change, the power of women and issues of prejudice, ‘Triple’ is Mvula’s latest solo exhibition in a decades long and esteemed oeuvre held in collections all over the globe.

“My work can continue to celebrate my life, to celebrate achievement and value,” says Mvula. “To value art is to collect and invest in art. That is the way we need art to be supported.”

Man allegedly digs up father’s skull, sets it on fire