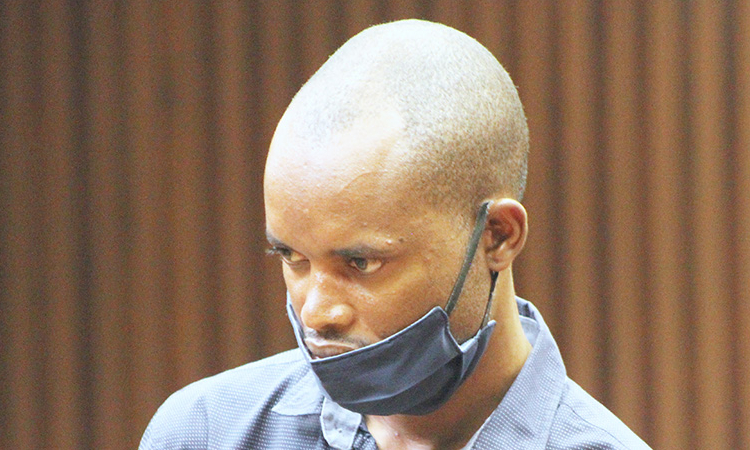 A WINDHOEK resident accused of murdering his wife in a knife and hammer attack two years ago is saying he had a blackout during the incident over which he is now being prosecuted.

Inock Nalisa (32) denied guilt on charges of murder, read with the provisions of the Combating of Domestic Violence Act, and defeating or obstructing the course of justice when his trial started before judge Christie Liebenberg in the Windhoek High Court on Tuesday.

Nalisa did not give a plea explanation to the court. During the cross-examination of one of the prosecution’s witnesses, though, defence lawyer Tjingairi Kaurivi said according to Nalisa he had a blackout during an argument with his wife, Petrah Munikonzo (30), on the evening of 31 October 2020, and he does not recall how she was injured.

The state is alleging that Nalisa murdered Munikonzo in the shack where they lived at the Okahandja Park area of Windhoek on 31 October 2020.

Munikonzo died after she had been stabbed multiple times with a knife. She was also struck with a hammer.

A cousin of Munikonzo, Beauty Mbango, has testified that she lived in a shack next to that of Nalisa and Munikonzo.

She said during the evening of the killing she heard an argument going on between Nalisa and Munikonzo, with Nalisa saying “leave me alone” and “I don’t want”.

Mbango said when she went to their shack to ask what was going on, Nalisa told her Munikonzo had started to beat him when he went into their house. Also speaking to her, Munikonzo told her she (Munikonzo) would beat her also, Mbango related.

She said the fighting next door continued after she had returned to her shack, and she then heard Munikonzo screaming: “Beauty, Beauty, this man is killing me!”

Mbango said she went to their shack again. When she asked Nalisa what he had done to Munikonzo, he said he had done nothing and that she was sleeping, she told the court.

She said Nalisa tried to prevent her from entering the shack, but she pushed past him. Inside, she saw Munikonzo lying under a blanket with a lot of blood on the floor.

When she left the shack, Nalisa was gone, she said.

Questioning Mbango, Kaurivi told her that according to Nalisa, Munikonzo had consumed alcohol and cannabis and started a fight with him after he had gone into their house, and he repeatedly asked her to stop and to leave him alone.

Kaurivi also said according to Nalisa he had a phone conversation with his sister after Mbango had gone to his shack to ask what was going on. After that conversation, Kaurivi said, Nalisa “simply blacked out” and he does not recall how Munikonzo got injured.

A police officer, constable Nicko Mulisa, told the court yesterday that Nalisa arrived at Wanaheda Police Station at about 04h00 on 3 November 2020.

Nalisa, who was not wearing shoes, told him he and his wife had been in “an altercation” during which she picked up a knife before he took the knife from her and stabbed her once in the chest and once in the back, Mulisa recounted.

When he asked Nalisa where his wife was at that moment, Nalisa answered that she was probably in a mortuary, Mulisa said.

The trial is continuing.

Nalisa is being held in custody.

‘Germans can keep their blood-stained money’