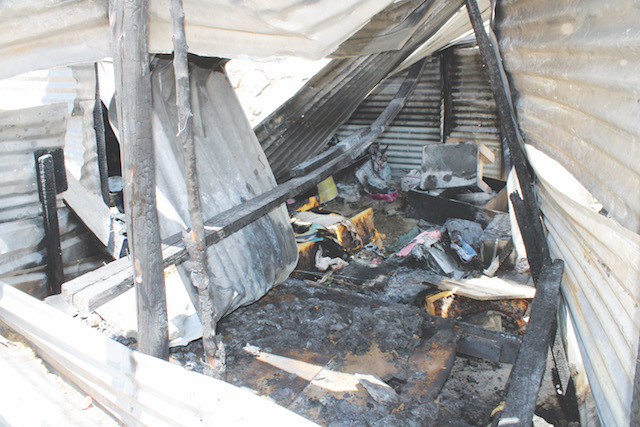 “SHE has always been mentally well, but her son’s death hit her so hard. This was her only child.”

This is how Alvina Kandirikirira describes her niece, Katjoko Tjaveondja, who lost her son in a shack fire on Tuesday in Windhoek.

Tjaveondja (28) was admitted to the psychiatric ward of the Windhoek Central Hospital after her son, Vezemba Mbimba (5), burned beyond recognition in their shack at Goreangab.

Khomas police spokesperson warrant officer Silas Shipandeni has confirmed the incident, saying the boy was sleeping when his mother left the house to buy bread and the shack caught fire.

Shipandeni says the incident took place on Tuesday at around 21h00.

“His lifeless body was found among the rubble,” he says.

He says the cause of the fire is still unknown as investigations are ongoing.

Tjaveondja’s aunt says her niece has not been herself since the incident.

She says Tjaveondja was transferred from the Katutura Intermediate Hospital to the psychiatric ward since she attempted to take her life.

“I have raised her since she was 12 years old. She was sent into a state of shock coming home to her burning shack and dead son.”

Kandirikirira says Tjaveondja lived in the shack with two children.

“The child who survived the fire was her sister-in-law’s child, who was rescued by neighbours,” she says.

A neighbour, Selma Shifeta, says she was browsing through social media on her phone when she smelled smoke.

“Because we live near a riverbed, I thought it was rubbish burning, but I immediately ran outside when I heard the neighbours shouting,” she says.

Shifeta says she ran out with her sister, Ndadaluluwa, who says the scene was crowded with shocked and confused people.

Ndadaluluwa says: “The neighbours who rescued the one child were not aware that there was another one, and by the time they realised it, it was too late.”