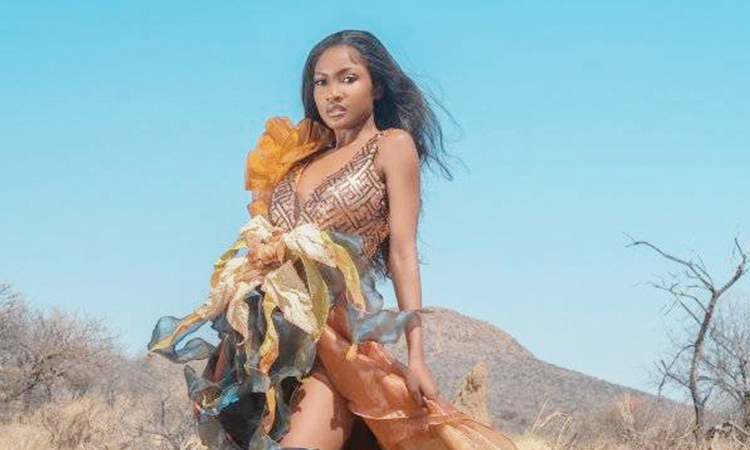 A FEW DAYS after Miss Earth Namibia 2022, Diana Andimba, revealed her fauna costume for this year’s Miss Earth International Pageant, she also showcased her national costume, inspired by the Welwitschia mirabilis plant, for the pageant.

The dress was designed by well-known fashion designer Dawn Diergaardt.

Andimba is the Miss Namibia second runner-up and was officially announced as Miss Earth Namibia 2022 in September.

This year’s Miss Earth pageant is set to take place in Manila, in the Philippines, on 29 November.

The winner will serve as an ambassador of environmental protection campaigns worldwide.

Andimba (24) is an aspiring chef and architect in training from Windhoek.

Miss Namibia beauty pageant director Umbi Karuaihe-Upi says the Welwitschia is one of the oldest plants in the world, and is endemic to the Namib Desert and southern Angola.

“I am so proud that we have selected something that is unique to Namibia, and that we will put it on the world map.” she says.

The Welwitschia is the oldest living plant in the world at 1 500 years old, and grows in Namibia and southern Angola.

Andimba says she chose the plant because she was impressed by its unique features.

“Through my dress I want to raise awareness of what is fascinating about this plant.

“The beauty of this plant for me is how it has survived for so many years. I want to show it to the world, because I believe it stimulates what Namibia is, especially when it comes to the environment.

“I am really excited to represent my country abroad. So far it has been such a great experience, and I feel ready for the pageant,” she says.

Kapofi ‘swindler’ slapped with another charge