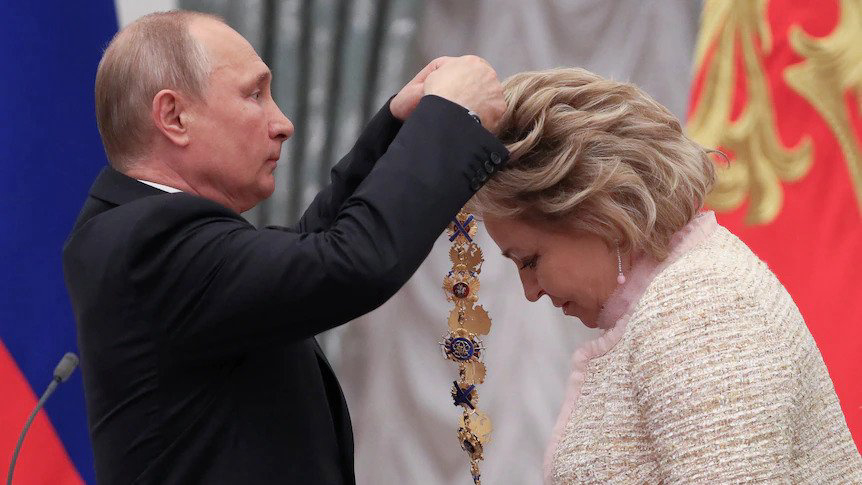 Groucho Marx, the 1890-born American comedian, is credited with the quote – “Behind every [powerful] man is a woman, behind her is his wife.” While the witty comedian must have said the statement to drive home a ‘comic relief,’ it appears that those exact words today define one of the most powerful men alive – Vladimir Putin.

At every point in time over the years, President Putin has had one or more powerful women around him – many of whom he shared intimate relationships. However, as Marx famously opined, the powerful women in Putin’s life were always ahead of his wife – now ex-wife, Lyudmila Aleksandrovna Ocheretnaya – in the hierarchy of importance.

Many years ago, according to an account in the 2002 book, “Vladimir Putin: The Road to Power”, Oleg Blotsky documented that President Putin had said – referring to his then-wife, that “Anyone who can live at least two weeks with Lyudmila, deserves a monument.”

President Putin and Lyudmila would officially part ways in 2014 according to what the Russian president would refer to as a “civilized divorce.” She has since moved on and remarried another Russian oligarch by the name of Artur Ocheretny – who is over twenty years younger than her.

For Putin, there is no need to get remarry – at least, not now. The Russian president has a list of powerful women with whom he has often shown his more romantic side. Apart from Lyudmila, who was a Russian flight attendant before she married Putin in 1983, there have been other women in his adventurous life.

In 2003, Putin had a child with his then housecleaner-turned-mistress, Svetlana Krivonogikh. She now lives in a $4.1 million in Monaco with her 19-year-old daughter, Luiza Rozova, who is also known as Elizaveta Krivonogikh.

According to reports, Putin fathered the four children — two twin girls and two boys, of Alina Kabaeva – the famous Russian Olympic gymnast. All the children were born in Switzerland, and she is said to have been living there with her children.

Victoria Lopyreva is a Russian TV personality and Miss Russia 2003 who, in 2018, was named an official ambassador of the FIFA World Cup and a director of the Miss Russia pageant. She is rumoured to be a longtime mistress of President Putin and now goes by the name Igor Bularov.

Vladimir Putin is undoubtedly one of the most powerful men alive in the world today. Since his decision to invade Ukraine in February this year, he has been the most talked about figure globally. But who is the woman behind Vladimir Putin’s war?

If you guessed Lyudmila Ocheretnaya, Svetlana Krivonogikh, Alina Kabaeva, or Igor Bularov, then you guessed wrong! The woman behind Putin’s war is none other than Valentina Matviyenko – Putin’s right-hand woman, who interestingly was born in Ukraine – the very country that she is supporting Putin to annex.

As is his nature for many years, before Vladimir Putin’s decision to invade Ukraine earlier this year, he called a meeting of his inner circle.

Interestingly, only one woman sits in the cabinet of Putin’s National Security Council – Valentina Matviyenko.

The Rusian President asked each and every one of the Security Council members to tell him their thoughts on his decision to invade Ukraine, on international television. The question came as a shock to the council chiefs, who were careful with their words, prompting Mr. Putin to snap at some of them repeatedly: “Speak directly!”

But the only woman in the room walked confidently to the lectern and proved why she is the right-hand woman of one of the world’s most powerful men – Vladimir Putin. Valentina Matviyenko spoke with the determination that excited Putin and oratory skills that ranked among the best.

“A humanitarian catastrophe has been unfolding before our eyes in the centre of Europe,” she began. She would further echo the words of Putin that the conceptual West was “trying to pit the two Slavic fraternal nations against each other”.

Ending her remarks, she made a plea to Putin. “I believe it is time to make a decision,” she said

“It is simply immoral to continue discussing it to death and dragging it out while pretending that something is being done.”

At no point during her speech did she appear fazed that she was asking the president of Russia to invade her homeland of Ukraine.

The opinions in support or criticism of Putin’s decision to invade Ukraine remain in a divide, and there are many who seem two-faced – not knowing whose side to take. But one thing is for sure –Putin has the support of Valentina Matviyenko, and it appears that is all he needs.

What are your thoughts?

Is Austria can be a Good Place for Bitcoin Trading? | The African Exponent.

8 Steps To Help You Get Started On Starting Your Own Business | The African Exponent.

The Ugandan court slaps new obligations on customers and bankers in its recent ruling. | The African Exponent.