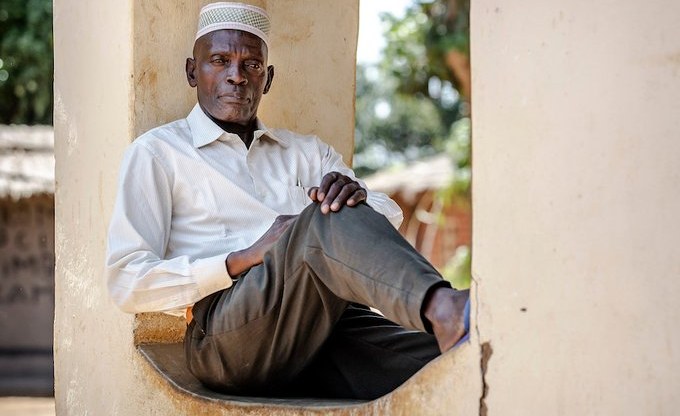 Sitting under a mango tree, Village Headman Patete marvels at a group of girls who are singing as they walk to a nearby primary school. In the past, a scene like this was not common in the village. Many girls stayed at home, while boys went to school – a tradition he is changing, one girl at a time.

“It’s been an uphill task,” says the headman, who is from the district of Machinga. “I had to go against some deeply held traditions to persuade my people to see [that] girls need access to education, just like boys.”

For a long time now, the headman has campaigned in his community for recognition of the importance of equality between girls and boys.

To support him in his quest to support girls’ education, he was given an opportunity to attend a training session as part of the Spotlight Initiative, funded by the European Union. As a pillar of his community, his opinion is important in changing the way men and boys think about the role of women and girls.

The training focused on ending sexual and gender-based violence, and increasing awareness of human rights. It highlighted the rights of women and how these were diminished. “As a community, we take for granted so many things,” Patete says, “for instance, the workload we put on women in the home and on our farms.”

“In our culture, even if we are coming from the field, the woman carries all of the farming equipment while the men stride home with [their] hands in their pockets. In the home, the wife has to cook again, while the husband is resting. This training has given me a much broader outlook on these challenges,” he says.

“It is something that in the past was somehow socialized in us that women should do more work. The training has reinforced in me my view that we are abusing women.”

The training sessions have reinvigorated Group Village Head Patete’s determination to champion women’s rights. He has approached fellow community leaders in their forums and highlighted the plight of women and girls, as well as the responsibility of the leaders to change the way communities perceive these roles, to encourage an end to harmful practices.

“It’s not easy changing the old ways of doing things, but we are making progress,” he says.

Combatting underage and early marriage is a case in point.

“There is no small crime,” he says. “All those who are found marrying off young girls are committing a crime. This is my stance and everyone in my area knows about this.”

Recently, he annulled the forced marriage of a 17-year-old girl to her 20-year-old boyfriend, after it was brought to his attention.

“Many people think that if they marry off their daughter after becoming pregnant, it’s a befitting punishment,” he says. “To the contrary, that’s a big mistake. What the girls need is a second chance.”

The girl in question, Stella John, is now 20 years old and back in school. She is a member of her village’s Spotlight Initiative safe space.

“If it wasn’t for the chief’s intervention, I could have been a housewife now,” says Ms. John.

In her culture, girls who have gone through the initiation rites are considered ready for marriage. Since she turned down a marriage proposal, she has not endeared herself to those who uphold the tradition. The safe space has become a place of refuge for her, helping her to shrug off this criticism and focus on her goals.

“It’s not easy to be known [as] someone who turned down marriage for school,” she says. “That is what is driving me hard to fulfil my dream of becoming a doctor.”