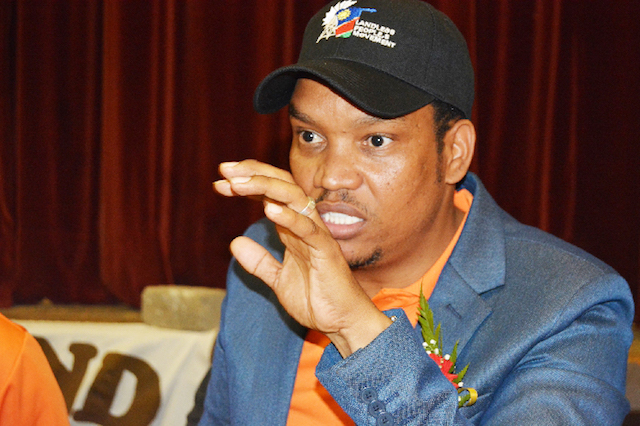 LANDLESS People’s Movement (LPM) leader Bernadus Swartbooi has hit back at prime minister Saara Kuugongelwa-Amadhila for saying the party has let down municipalities in the country’s south.

Swartbooi told a press conference yesterday that Kuugongelwa-Amadhila failed the nation during her tenure as minister of finance, as well as being the country’s prime minister.

“Where is Saara’s performance when 1,5 million Namibians don’t have food to eat, according to the Food and Agriculture Organisation’s reports?” he asked.

He said during Kuugongelwa-Amadhila’s tenure, the rich became richer, and the poor poorer.

“There were no savings made when the Southern African Customs Union ‘windfalls’ were consistently strong, and the people of this country have not obtained any decent, recognisable and enduring services from the natural resources of the nation, which honourable Saara could have deliberately redirected with the powerful position of finance minister,” he said.

According to Swartbooi, the LPM is still a “baby”, which has been governing for less than two years.

“We are pushing hard forward, cleaning up Swapo’s mess everywhere we are governing, reshaping institutions from the culture of entitlement, corruption and nepotism into one of performance and integrity,” he said.

The prime minister recently said the incomplete projects in the south, valued at over N$500 million, are due to stagnating service delivery by the LPM-led regional council and fighting between the governor and the regional council.

The projects date back to 2015 and include the University of Namibia’s southern campus, the regional home affairs and immigration office, the Fonteintjie Fish Project, the Aussenkehr water reticulation network, and the development of a primary school at Oranjemund