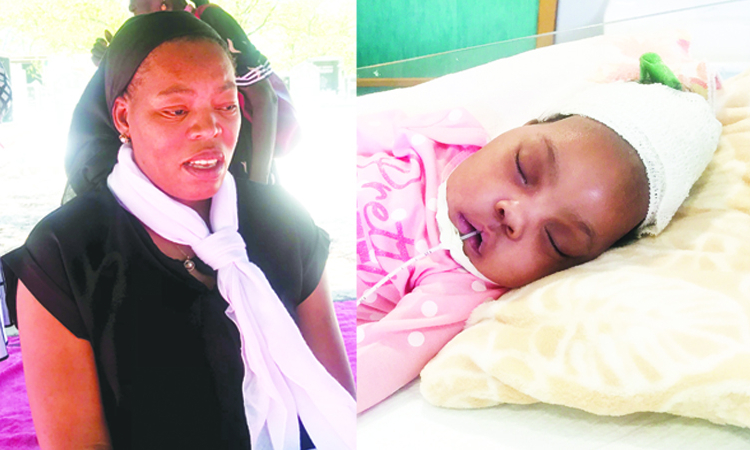 At the age of 35, her pelvic bones are dislocated – a reminder of the nightmare she would rather forget.

On Saturday, when she went to bury her newborn baby daughter at the old Ongwediva Cemetery, she was in unbearable pain.

Life had not always been this complicated.

Two months ago, she could walk on her own, and was looking forward to the birth of her second child.

But her life changed on 17 September when she checked into Oshakati Intermediate Hospital to give birth.

She believes her baby, whom she named Salome Ndafengono, would still be healthy and alive if only they had listened to her.

She had been admitted for a few days.

Especially Wednesday, 9 November, was supposed to be a happy day, but instead, it turned into a nightmare, she says.

According to a post-mortem report, Suama died due to cardio-pulmonary arrest.

Joachim wrote a letter to the Health Professions Councils of Namibia on 31 October to look into the matter.

At the time of her letter, she was in a post-maternity ward isolation room and her baby was fighting for her life in the premature unit acute care room.

“I have been in labour the whole night in the observation room. I told the nurses they must talk to the doctor on call to help me go to the theatre, since I could no longer take the pain, and I did not have energy,” she wrote.

The day she gave birth, Joachim said she was taken to a doctor for a sonar and was told the baby weighed 3,2kg, which is small enough for her to deliver it vaginally.

She gave me an hour review.

“I got back to the observation room 40 minutes later. After the nurse reviewed me, she told me the baby’s head was coming,” she said.

Joachim said she was taken to the delivery room and pushed for an hour before she told the nurses she could no longer bear the pain.

According to Joachim, her daughter was born at 09h55 and weighed 4,2kg.

Speaking to The Namibian at the baby’s funeral, she said she is planning to sue the Oshakati Intermediate Hospital.

She said nurses took Suama after her birth, and later told her she was tired and unable to breathe well.

“The doctor really knew the consequences of pushing out a big baby. It would either be my life or my baby’s life, but she made me push my baby, who was very big.

“If she would only tell me, I would have looked for assistance at another hospital. Oshakati hospital is not the only one in the north. Now she has caused my baby’s death,” Joachim claimed.

She said Suama’s brain was severely damaged as she was “bouncing” against her pelvic bones during her birth.

“I was using a wheelchair when I got the baby,” she said.

She said the infant was diagnosed with hypoxic ischemic encephalopathy (HIE), a type of brain dysfunction that occurs when the brain doesn’t receive enough oxygen or blood flow for a period of time.

“I have dislocated pelvic bones, and I have been using a wheelchair. I am going to sue them, seriously,” she said.

Contacted for comment on Saturday, Oshakati Intermediate Hospital medical superintendent Ruben Kanime referred The Namibian to the Ministry of Health and Social Services.

Executive director of health and social services Ben Nangombe said the ministry would launch an investigation into the matter to determine the cause of the baby’s death.

“Any negative outcomes from a hospital set-up is regrettable, and before anyone comments on that averment, the matter has to be subjected to a thorough investigation, and the health professions councils would have to be involved,” he said.

Pen experiment turned into side hustle