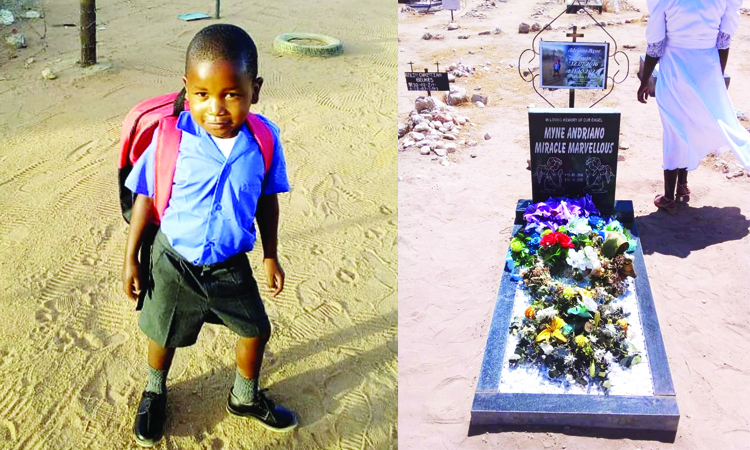 THE little sister of the late Andriano Myne Oswyn keeps asking her mother when her big brother is coming home.

Rieta Seibes says she is heartbroken because she does not know what to tell four-year-old Loide Oswyn.

“Yesterday, after the funeral she was asking where Andriano’s plate was and when he was coming home,” said Seibes.

She says her son was a very inquisitive person who wanted answers to many things in life and was full of ideas.

“Whenever he sees a bank card or a card that looks like one, he will ask if he can keep it because he also wants to have money on a card. I was forced to show him his bank card because I opened a savings account for him at birth,” she said.

Despite the outstanding DNA results, Andriano’s remains were handed over to the family for burial.

Last Friday, all liquor outlets at the town were closed in respect of Andriano, whose death shook the community of Karibib.

He was laid to rest on Saturday at the Karibib cemetery at the Usab settlement.

The funeral was attended by hundreds of people from across the country, including his schoolmates.

His murder has been described as “wicked” by Karibib constituency councillor Malania Ndjago, who said it was the first such case to be reported at Karibib.

“It is a very wicked thing. Karibib is a small town and someone killed a child and no arrest has been made. That person who killed Adrian could even have been in church and at the gravesite with us,” she said.

She called on the police to deploy the serious crime unit investigator to assist in bringing Adrian’s killer to book.

Ndjago also urged the community to desist from spreading rumours about Adrian’s death and rather pull together to bring about the arrest of the perpetrator.

“Please be vigilant and look out for suspicious visitors to our constituency, so that such events can be avoided,” she said.

This follows a robbery at a shebeen at the town last week in which three peoplesustained gunshot wounds.

“The life that was taken was of a person who could take our nation to another height. Community leaders should continuously create awareness about these crimes against children and women,” he said.

Erongo police regional commander Nikolaus Kupembona said “a number of people have been questioned but nobody was brought before court”, he said.

Kupembona said DNA analysis will still be conducted as it will be needed in court as key evidence.