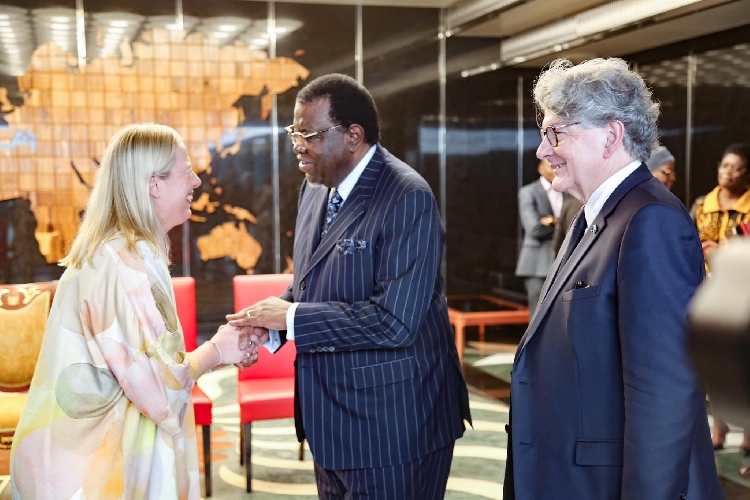 He said Namibia’s position on the war remains neutral. Geingob and the EU commissioners met at State House on Wednesday afternoon to sign a N$437 million bilateral cooperation deal. The president said this after the commissioners mentioned their gas dependence on Russia and how African countries abstained from the vote on the conflict at the United Nations Human Rights Council.

He reiterated that the Ukraine-Russia conflict is not a world war and should not be mixed with bilateral relationships.

“So, you shouldn’t put our relationship against your problem of war. We are cooperating as Namibia and the EU… Our history also teaches us where we were and who was with us. That’s simply what I am saying,” he said.

“You are putting it like we are doing it to help you to escape from other problems but we are doing it because we are interested in developing our country. We have the resources and you have the means and everything.”

He said Africans abstaining does not mean that they are endorsing the killing of any person, and called on the EU to de-escalate the war.

“You, Europeans fight a war in Europe and say world war one or two. It is a European war because you are fighting it at your home. Our position, as Africans, is we are neutral but positive in saying no war is good,” Geingob said.

Meanwhile, Geingob also said that African countries must remember who assisted them during their fight for independence.

“The problem is some of us are very old and have been living in this world, fighting to free our country and we remember certain things that were happening during that time.

EU commissioner Jutta Urpilainen responded to Geingob saying they are assisting Ukraine because they want to defend a rule-based international order.

Urpilainen said they are steadfast in helping Ukraine to fight the conflict with Russia.

“We have to provide different kinds of support; military, financial and humanitarian assistance. Because we feel they are not only fighting for their country before all of us, but also for the UN charter,” she said.

Urpilainen reminded Geingob that Namibia also continues to feel the impact of the conflict.

“We have not turned our back to the rest of the world because we fully understand that even though the crisis is taking place on our European soil, the crisis is global.

“You are facing the consequences of that war because of food security and inflation,” she said.

European Union commissioner in charge of the internal market, Thierry Breton, said they understand the stance of African countries in terms of the conflict.

“My point was that this war is accelerating the green transition. We now have momentum that we need to use. There is a strong appetite,” he said.

Urpilainen and Breton are in Namibia to launch an action plan with the National Planning Commission worth N$437 million, as well as to consult on plans for green hydrogen.

These funds will be allocated to early childhood education, governance and gender programmes, including the Anti-Corruption Commission.

This funding is also part of Namibia and the EU’s agreement to export critical raw materials and green hydrogen to European countries to ensure that Europe ceases its dependency on Russian gas.

In recent developments, Turkish news agency, Anadolu Agency, reported that Germany said their government and closest allies were not interested in a diplomatic solution in Ukraine, but instead were “set on its permanent escalation” and “unlimited pumping” of Ukraine with “new deadly weapons”.

This comes as Germany announced on Wednesday that it would send 14 Leopard 2A6 battle tanks to Ukraine and allow its allies to export them to do the same.

“This extremely dangerous decision takes the conflict to a new level of confrontation and contradicts the statements of German politicians about Germany’s unwillingness to get involved in it,” Russian ambassador Sergey Nechayev said in a statement, published on the embassy’s website.

Cricket bonanza in store – The Namibian

Otjiwarongo cop to appear in court over missing rhino horn