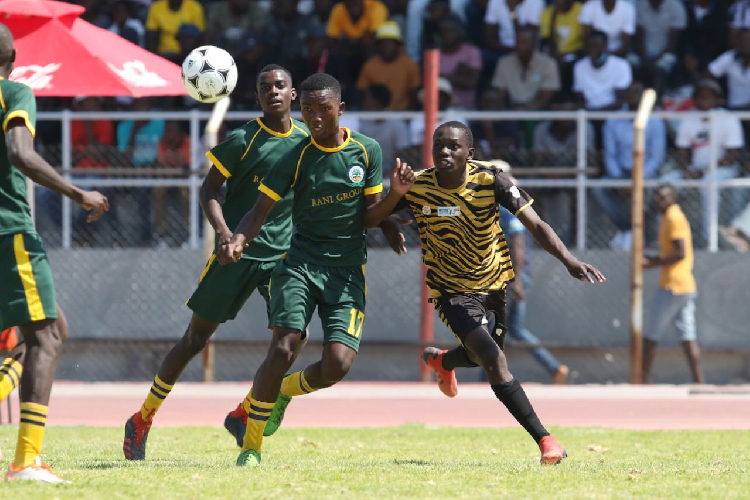 DEFENDING champions //Kharas got their Namibia Newspaper Cup powered by Standard Bank campaign off to a winning start with a 1-0 victory against Kavango West in Group A on Friday.

Eugene Fredericks scored the winning goal early in the second half when he pounced onto a loose ball to hit the back of the net with a fine shot from the edge of the box.

Kavango West also had their chances, especially in the first half when Richard Pablo, Sandrake Kasanga and Nkayi Sisindi all had shots saved, but //Kharas finished stronger and dominated the second half.

Wilhelm Nekayi had a fine game in attack creating numerous problems for Kavango West’s defence, while Benediktus Thikusho and Victor Kooper came close in the closing stages of the match.

In another Group A match, a late goal by Enos Boly gave Zambezi a share of the spoils in a 1-1 draw against Otjozondjupa.

Ellion Mukendwa headed wide from a corner early on but Otjozondjupa did most of the attacking in the first half, with Santos Sibolile coming close to scoring on two occasions.

Otjozondjupa nearly took the lead on 11 minutes when Zambezi goalie Nalumino Musweu fumbled a backpass but he managed to recover just in time.

Otjozondjupa maintained the pressure with two free-kicks in quick succession before their pressure finally told on 17 minutes when they won a corner and Gustav Kaeka scored with a great shot.

Zambezi grew stronger as the match progressed and Sinyambo Muhita nearly opened their account with a cracking shot that Ikuaterua Mungendje just managed to tip over for a corner.

At the other end Giovanni Gaingob shot narrowly wide after a quick counterattack by Joao Da Costa, but it was Zambezi who got the equaliser when Boly scored with a cracking shot from outside the box with six minutes to go.

In an exciting Group B match, Ohangwena and Omusati shared the spoils in a 1-1 draw.

John Andreas and Taapopi Ishitile came close early on for Omusati, but Ohangwena took the lead from a quick counterattack on 18 minutes when Martin Mandume scored with a cracking shot.

Ohangwena maintained the pressure with Isai Kalenga saving well at the feet of Mandume, while Kalenga also saved well from Silas Haufiku.

Mandume came close for Ohangwena when he volleyed narrowly wide early in the second half, but Omusati drew level on 36 minutes through a freekick by Kosmas Petrus that took a bad bounce to flummox Ohangwena’s keeper.

Ohangwena seemed to have regained the lead when Hamunyela Julius put a loose ball into the net, but it was ruled offside.

In the final stages, Diana Namulo hit the bar for Omusati, while the impressive Mandume also came close for Ohangwena.