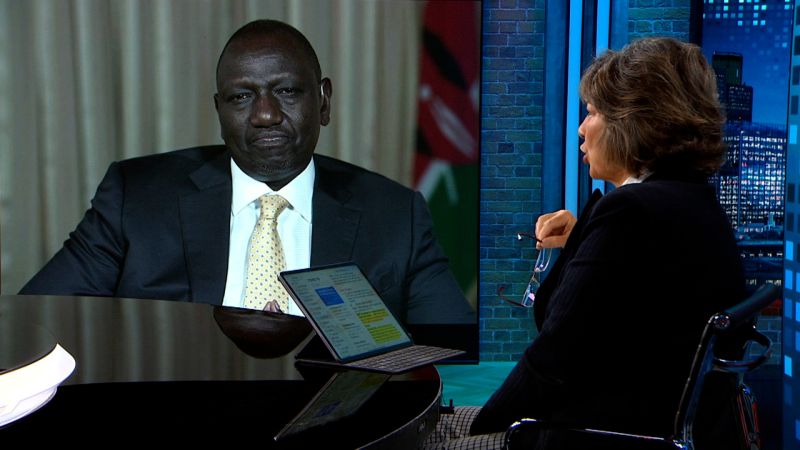 Kenya’s President-elect William Ruto has told CNN’s Christiane Amanpour that he will work to unify the country following a narrow election win, as well as playing an active role in solving East Africa’s security and humanitarian issues.

Speaking on Amanpour’s show in an exclusive interview Wednesday, Ruto said he had already reached out to his election rival Raila Odinga, and said he would build alliances that will help to bring the country together.

Ruto, 55, won with 50.49% of the vote against Odinga’s 48.85% in last month’s election, which passed off calmly despite Kenya’s recent history of political violence, including the killing of nearly 1,500 people in the aftermath of the December 2007 election.

Asked about the peaceful proceedings, Ruto said that the situation has been improving since 2007, and the next election will be even better.

“I think it speaks to the heart of the maturity of the democracy of our country,” he said. “No citizen, no leader wants their country to be famous for violence.”

“We can go to an election, we can decide who our leaders are and the next day we can go back to work,” he added. “That is the standard we have raised for ourselves as the people of Kenya, I am very proud of it.”

Amanpour later asked whether outgoing President Uhuru Kenyatta, who supported Odinga’s election bid despite Ruto being his vice-president, had been in touch since the election.

“Unfortunately, President Kenyatta has not seen it fit to congratulate me,” he said. “Maybe he’s a bit disillusioned or maybe he’s unhappy that I defeated his candidate, but that is the nature of politics.”

Among those who have contacted Ruto are a number of world leaders, and he says he told them not to expect “a big shift” in Kenya’s foreign policy.

“I intend to scale up the participation of Kenya in many of the areas, especially in our regional peace initiatives,” said Ruto.

“I will be available, I will play my part, I will scale up Kenya’s standing and contribution in that space so that together we can contribute to a better, a much more peaceful neighborhood.”

Among those challenges is Somalia, with has longstanding security issues and now a looming famine.

“Somalia is a difficult nut to crack,” said Ruto, who said he has worked with the country’s newly-elected President Hassan Sheikh Mohamud in the past.

“We are looking forward to working with him and with the international community so that we can square out the challenges in Somalia, make it possible for Somalia to take care of its own security concerns,” said Ruto.

Humanitarian issues are also on the agenda, and Ruto told Amanpour that he will work for a peaceful resolution to the conflict in Ukraine in order to allow more grain shipments from the country to reach East Africa.

Ruto plans to boost grain production locally and regionally, he said, while refusing to point the finger at Moscow over the shortages.

“I do not think blame game would help in that equation,” he said.

Amanpour later quizzed Ruto on human rights, particularly his previous comments that there was “no room” for homosexuality in Kenyan society.

“I am very clear that we respect everybody and what they believe in, but we also have what we believe in and we expect to be respected for what we believe in,” said Ruto, who said he does not think that LGBTQ rights are an important topic for Kenyans.

“We do not want to create a mountain out of a molehill,” he said, adding that he prefers to focus his efforts on unemployment and hunger. “When it becomes a big issue for the people of Kenya, the people of Kenya will make a choice.”

Same-sex relations have been banned since the British colonized Kenya in the late 19th century. Kenya’s penal code criminalizes “carnal knowledge against the order of nature.” Anyone found engaging in same-sex relationships could face up to 14 years in prison.

Amanpour also pressed Ruto on his controversial promise to deport Chinese people from Kenya, but the President-elect argued that he had been taken out of context.

He was referring to Chinese people who work without a permit, said Ruto.

“Anybody that operates outside the law, it doesn’t matter where they come from, they will be sent back from where they came from.”

The Grammys are considering adding an Afrobeats category | CNN