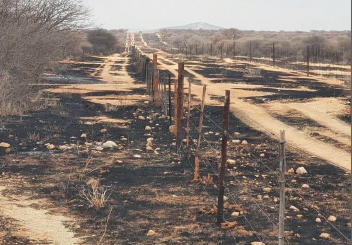 THE raging fires in the Tsumis/Rehoboth area have destroyed several farms, pasture land and fences, leaving farmers in dire need of assistance to feed their surviving animals.

Gerhard Enssle, who lost about 40 to 50% of pasture and his fences, says it is a bitter pill to swallow.

“We had a drought for years. At least we had good pasture and rain, but now as a result of circumstances, half of my pasture is gone,” says Enssle.

“We get frustrated about how the fire came about due to negligence, I cannot say for sure what happened, but it looks as if there was negligence and that makes it painful that people do not take the necessary precautions on farms to avoid such disasters from happening. This makes you feel unhappy.

“If it is an act of God such as lightning, then it’s something different,” Enssle says.

He says precautionary measures were discussed by the Tsumis Farmers Association on 3 September.

“The man (Quinton Diergaardt) that is in the hospital, is our coordinator of fires. He clearly told farmers what we should do, yet it still happens. The people that let these things happen are the people that do not attend these gatherings,” says Enssle.

Diergaardt, the vice chairperson of the Tsumis Farmers Association, and Rehoboth mayor Enrico Junius, who both own farms in the area, are in critical condition in a South African hospital after suffering burns from the fire on Wednesday, chairperson of the association Heine Izaacs confirmed on Saturday.

He says Junius’ farm was destroyed by the fire.

Meanwhile, Enssle says farmers and their workers should take precautionary measures to prevent such incidents from occurring in future, as this affects the lives of people and animals.

Phillip Izaacs, whose farm was completely destroyed by the fire, says it’s sad and disappointing to see a farm that has been in their family for over 40 years destroyed.

“I don’t know what we will do but we need to get help from somewhere,” he says.

Izaacs, who was at the fire scene from Wednesday to Saturday morning, says approximately 30 000 to 35 000 hectares were destroyed.

“We have not heard about animal losses but there may be wildlife losses. We are busy assessing the situation.”

He says the farmers association is looking into assisting farmers who have lost pasture in the fire.

“If there are farmers without pasture, we will assist the farmers. We are busy assessing everything to see how we can help.”

He urged farmers and the community to unite to help one another.

“We must stand together and we must be vigilant and more cautious in terms of these fires. We must help other farmers in need and assist each other so that the damage does not continue.”

Many farmers in the area expressed their gratitude to those who assisted in extinguishing the fire.

Cycle Classic: Behind The Scene

MMA hits Namibia with a bang