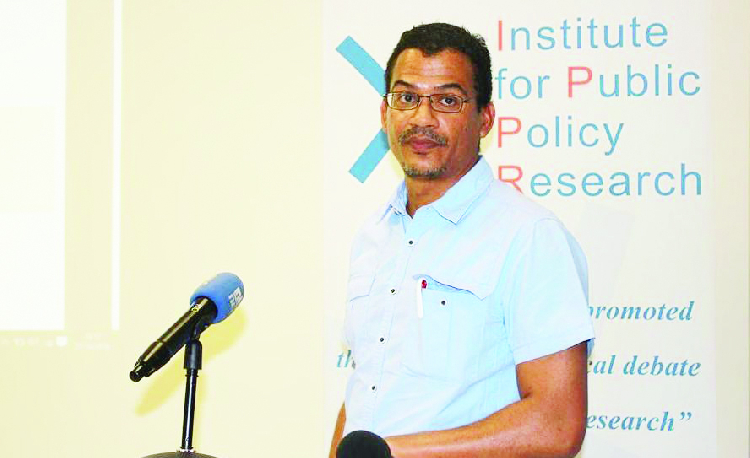 THE Namibia Investment Promotion and Development Board (NIPDB) allegedly paid close to N$70 000 as a participatory fee for the quality achievement award it received last year.

This was revealed by the Institute for Public Policy Research (IPPR) yesterday, which called out the NIPDB and the Namibia University of Science and Technology (Nust) for using public funds to pay participatory fees.

The IPPR questioned the legitimacy of the awards, saying it believes the European Society for Quality Research’s quality achievement award is a money-making scam.

“These are examples of careless and wasteful spending of public funds at a time when the Namibian government is going around telling everyone listening it is cash-strapped,” IPPR researcher Frederico Links said in their latest publication.

The NIPDB was presented the award at a ceremony in Dubai, in the United Arab Emirates, on 11 December during the Expo 2020 Dubai.

This was 12 months after the board was established.

In responses seen by The Namibian, the NIPDB told the IPPR the European Society for Quality Research (ESQR) contacted it in November 2021 with the news that the board has been selected as the winner of the quality achievement award.

The NIPDB said it only accepted the award after the European Society explained the basis of the award, as well as how the winners were chosen.

“The award-winning companies, public administrations and organisations are selected by the ESQR based on the results of its polls, consumer opinion research and market studies.

The board, however, denies it has bought the award.

“The funds that were dispersed in the process of receiving the award were participation fees that were required from all participants.

“The participation fees cover attendance of the convention during which the award ceremony is held, reproduction rights and the use of promotional materials for marketing purposes, accommodation, and tickets to the gala dinner among other things,” the NIPDB told the IPPR.

In July this year Nust received the same award which was collected by its vice chancellor, Erold Naomab, in Spain.

“However, factoring in air travel, accommodation and daily subsistence, Nust potentially spent somewhere between N$150 000 to N$200 000 for Naomab to collect the award in Spain,” Links suggests in the publication.

Nust spokesperson Nadia Meding said the assertion that these are vanity awards is news to the university.

Meding said the award came at a time when Nust had not received awards after many years of not being considered.

“We, therefore, had little reason to believe that these are vanity awards,” she said.

In 2016 the ESQR also awarded the University of Namibia the international diamond prize for excellence in quality.

The IPPR further used the 2014 report of the Organised Crime and Corruption Reporting Project (OCCRP), which identified ESQR as one of the western Europe-based entities targeting eastern Europe’s and other developing countries’ public and private entities for prizes and awards.

The OCCRP report states: “The pattern appears to be that anyone who pays enough money can win an award. Many winners come from the public sector, which means that money paid for awards comes from budgets or ultimately from the pockets of taxpayers. These awards do not come cheap.”

They further say the cost of obtaining these awards is labelled as a ‘participation fee’ which goes towards hosting a ceremony, usually in an expensive and culturally renowned European city.