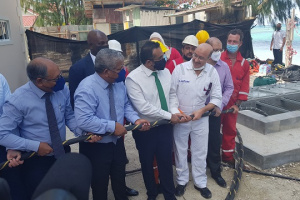 The chairman of Seychelles Cable Systems (SCS), Benjamin Choppy, who is also the Principal Secretary of the Department of Information Communications Technology, told SNA that based on the new technologies that come with the new cable, people could get more data for the same cost.

Choppy stressed that this is just a trend that SCS is anticipating but cannot speak on behalf of the service providers.

Choppy told SNA that the new cable will greatly enhance Seychelles’ connectivity to the world and ensure minimum interruptions in the future.

The first undersea in the island nation became operational in 2011. The Seychelles East Africa System (SEAS) is a 1917km submarine optic fibre cable between Seychelles and Tanzania.

This second cable connects the island nation to the Pakistan and East Africa Connecting Europe (PEACE) system. It is a 15,000 km submarine cable from Pakistan to France, extended from Pakistan to Singapore for an additional 6,500km. The main trunk lands in Singapore, Pakistan, Kenya, Egypt and France and branches to the Maldives, Malta, Cyprus and now Seychelles.

The PEACE cable system is designed with the latest 200G transmission technology and WSS ROAMD BU technology, which provides the capability to transmit over 16Tbps per fibre pair servicing growing regional capacity needs.

“This new cable means that Seychelles has now achieved its objective of having some diversity in our international connection, which is a major achievement from the country,” added Choppy, who explained that these two cables are completely separate from each other.

“PEACE is a more recent system, with obviously more advanced technology, where the SEAS system could bring around 10gb/s per wavelength, whereas a wavelength on the PEACE system can bring up to 200gb/s,” he said.

UAE and Seychelles agree on key development projects in housing, sports and health