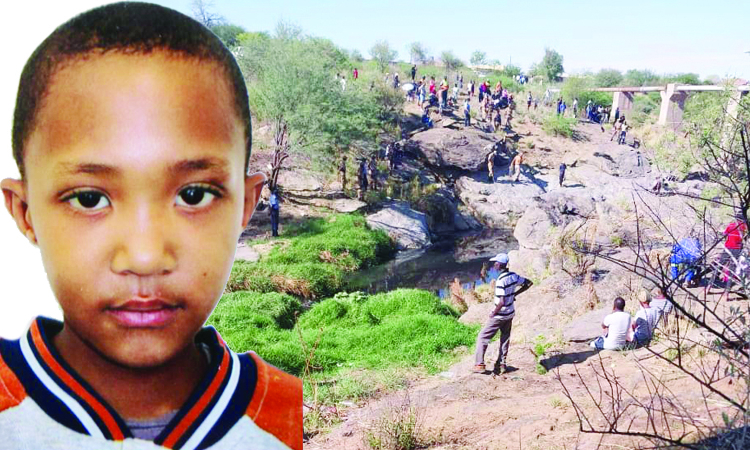 THE family of six-year-old Jayden Isacks is left in deep sorrow and shock after his body was discovered by a private diver in a sewage-polluted river in Windhoek’s Grysblok area yesterday.

His uncle Jonathan Feris and father Shauwen Isacks said they had hoped he would be found alive.

“The day started as normal, on Sunday afternoon after lunch when Jayden left home to play at his friend’s house, with the permission of his mother, and today his body was discovered in the riverbed,” said Feris.

He said he was informed not to go to the park as it was a bit far from home.

“Meanwhile, we were not aware that he went to that specific friend’s house that is close to the park, and there is no fence,” said Feris.

Feris said he was at home when two of Jayden’s friends ran to him to say that he had fallen in the water.

“The private divers initially refused to go into the water after they found out that it was sewage water, so some community members jumped in but he was not found until the divers went in today (Monday) and found him,” he said.

Feris said Jayden’s mother was not at home at the time, as she went to go collect school supplies from her sister’s place, and breaking the news to her was very difficult.

He said Jayden was just about to start Grade 1 next year and his parents were preparing by buying some stationery and black school shoes. “We stayed up calling him and searching for my nephew until 20h00, we had to go back home because it was getting dark.

“This time around the divers came with their equipment and had a conversation with the deceased’s friends, who pointed out the exact direction where he fell, and in just a few minutes the body was discovered,” he said.

Feris expressed his frustrations about the Windhoek municipality and the Namibian government not hearing their pleas, after years of complaining about the unsafe area. “It is pure negligence from the City of Windhoek and the government, as this is not the first time such an incident is happening, there are no warning signs or anything to caution the public because that is a danger zone,” he said.

Also speaking to The Namibian with tears running down her face was Jayden’s godmother and aunt, Elizabeth Cupido.

“My boy was so sweet, I am hurt because this water is something that we have been complaining about for the longest time but nothing has been done.

“A few years back twins were reported dead after they drowned in the same area, not just the danger but also the horrible smell because it is sewage water,” Cupido said.

The deceased’s mother Chantelle Mentor was still in shock and unable to utter a word.

His father said he is still hurt and in denial, even after seeing Jayden’s remains as he had hoped to save his son.

“Arriving at the scene was very painful and terrifying. I still have mixed emotions,” he said.

“We are pleading with the Namibian government to help, my girlfriend and I are both unemployed,” he said.

According to City of Windhoek spokesperson Harold Akwenye, residents have damaged the pipes, causing the water to flow down and fill up the ponds.

“My condolences to the family of the boy. It is indeed a tragic accident. The sewage dam was as a result of water erosion over the years,” he said.

Akwenye told The Namibian that during the rainy season, the (hole) gets bigger and deeper as the water flows to Goreangab Dam.

“People in that area poked holes in the sewage pipe that transports sewage to our Gammams reclamation facility, hoping to find valuable metals like coins and spoons, etc.

“As a result, the water flows and fills up the holes in the riverbed,” Akwenye said.

Akwenye said other similar areas where there are sewage dams have been fenced off, only for the fence and gates to be stolen by community members.

“We are looking at alternative measures to eradicate and prevent the damage to the sewage pipes by community members.

Some holes have been standing in water in the river after the recent rains, and it’s an almost impossible task to clean/empty each and every river of such standing water pools,” he said.

The Namibian previously reported an incident at the One Nation informal settlement in which Matilde Stephanus (46) was discovered floating face down by a passer-by in a pool of water believed a polluted riverbed.

“The woman is suspected to have misstepped on a narrow concrete structure built across the riverbed and to have fallen,” he said.