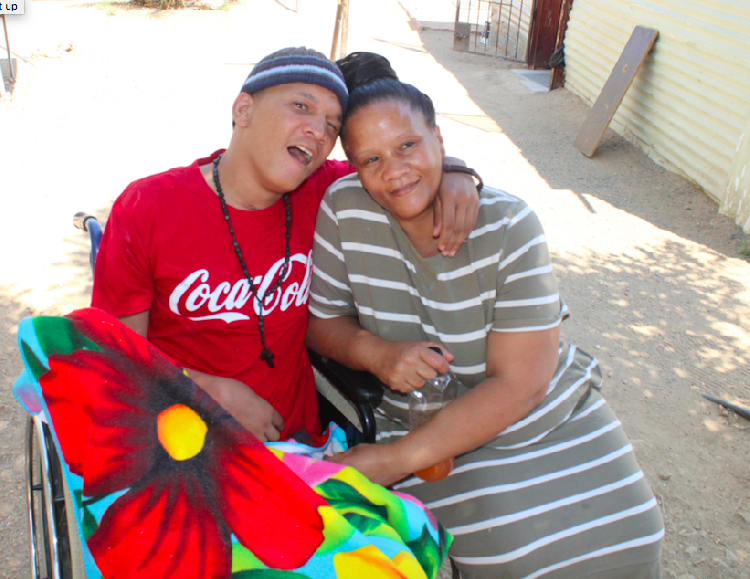 “ALMOST everyone, including medical doctors had given up on him. They all thought I was going to lose him.”

So says Jonnie Daries (45), the mother of Shalldou Daries, who was in a vegetative state three months ago.

Shalldou (22) was allegedly brutally attacked by his childhood friends, locked up in a room, and covered with a blanket for a day.

Jonnie says her son’s transition has been a miracle.

“Getting to this point has not been easy. So many times I almost believed there is nothing I can do to save his life. But you know what they say about a mother’s love . . . There was just no way I could watch my son suffer and not do anything about it.”

Jonie said after The Namibian previously reported on her son’s condition, she was assisted with food, money and a wheelchair.

“I spent so much time praying for God’s will to be done, because it was impossible for me to do it all alone.”

Daries, who is a single mother of two, says Shalldou’s father reached out to her after he saw the article in the newspaper, but hasn’t been in touch since.

“He promised to help his son and be there for him both financially and emotionally, but until today we have not received anything from him.

“The day after the attack, Shalldou was rushed to the intensive care unit of the Katutura Intermediate Hospital in Windhoek by the two ‘friends’.

“Since then, his life has never been the same again, as he has been bedridden and has to be washed and fed,” she says.

Shelldou requires supervision, as he is unable to walk or talk. However, he is now able to eat by himself and communicates through gestures.

The two accused, Llewellyn Olivier and Alistair Steenkamp, have been arrested and have appeared in the Windhoek Magistrate’s Court on charges of attempted murder and kidnapping.

Neither Olivier nor Steenkamp responded to requests for comment.

Jonnie says she had the shock of her life when the hospital called her and she had to witness her child fighting for his life.

“He left the house in the morning to attend a funeral of one of the suspects’ father, saying he would return at around 14h00 or 15h00, but as soon as those hours passed, I had a strange feeling something was not right,” she says.

“That morning I went to church and came back thinking I was going to have an amazing day, until I was hit with the worst news any mother can ever hear,” she says.

“Just when he turned 21, this had to happen. This was supposed to be a time when he lived his life to the fullest, but instead he would be lying on a bed, unable to walk, talk or say a word,” she says.

A day in a 'okalefa'