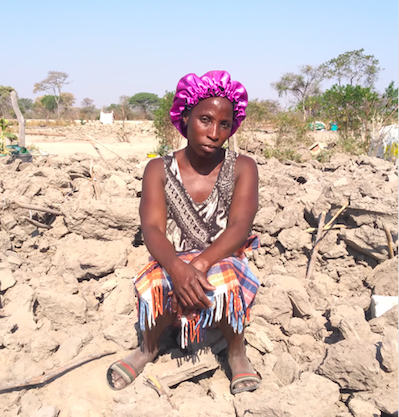 MWAKE Matengu lies awake every night without a roof over her head.

Matengu (49), a single mother, says she has been crying herself to sleep every night since her two-bedroomed mud house was demolished at Lwanyanda informal settlement by the Katima Mulilo Town Council last week.

Her house and those of many other residents, were demolished by the council and Kayuni Investments through a court order which states they are illegal land occupiers on land which is earmarked for development.

Matengu on Sunday told The Namibian she has spent over N$30 000 on building her house.

“It is very painful for me, because I built that house so that my children and I could have a place to call home.

“I have even lost weight in the past few days. I don’t know where to go,” she said.

She said the house was home to herself, her two sons, her late sister’s two sons, and her three grandchildren.

“I sent the children to go stay with my sister at Chotos.”

Matengu said she was supposed to travel back to Windhoek yesterday, since she is a third-year community health education student at the Tulipohamba Training and Assessment Institute.

She cannot do so now, since she cannot afford it.

“I used my bus fare money to rent a car to take my goods to my sister’s place at Choto,” she said.

She said the Katima Mulilo Town Council has refused to allocate her a plot at Nova.

They claimed she already had a plot at Choto, she said.

Matengu said the plot in question is her late mother’s.

Katima Mulilo Town Council chief executive officer Raphael Liswaniso on Friday during a press conference, however, said Matengu was part of the group of people who refused to be relocated to the Nova compound.

“The lady who was crying was given a plot, Erf 802, but she refused (to accept it). Instead, she and the others started instigating people not to move to Nova compound.

“They started selling plots to other people, even foreigners. She was crying because the people whose houses were destroyed will come and ask for their money, because she sold them those plots,” he said.

Liswaniso said the town council has tried everything to evacuate illegal land occupiers in a civil way over the years – with no success.

The operation was extended to Cowboy settlement over the weekend, and the Dairy area is said to be due this week.

Liswaniso said the council has entered into a public-private partnership with Kayuni Investments for the development of a housing project on the land in question, and wants to commence with the project.

He said the council started engaging the land occupiers in 2017 to vacate the area and apply with the town council to legally obtain land.

“However, they did not do that, which has led to us forcefully removing them by demolishing their houses in 2017. We admit that by that time there was an error in terms of us not having a court order,” he said.

Liswaniso said to rectify the error the council decided to identify the land occupiers who claimed to have bought the land in question from the Mafwe Traditional Authority, to resettle them at Nova compound.

“About 800 plots planned at Nova compound were serviced with the help of the government and Kayuni Investments. The land grabbers we had to move from Lwanyanda to Nova were fewer than 400.

“We relocated them as such, however, 16 of them refused to move. Instead, they remained and started selling plots to people at Lwanyanda when the others moved,” he said.

Liswaniso said Kayuni Investments later agreed that the illegal occupants may temporarily occupy the area, while the council serviced the land, but they refused to allow the developer to do so.

“The developer took loans from the bank, and the longer they take, the higher the interest rate will be. The surveyors who went to Lwanyanda to do their job were attacked by these land grabbers.

“As a result an interdict was requested from the courts to stop them assaulting the surveyors,” he said.

Namibian Economic Freedom Fighters (NEFF) deputy leader Kalimbo Iipumbu in a press release on Friday said: “This is a total disregard and violation of human dignity, which must be condemned with the contempt it deserves.”

Iipumbu called for an immediate investigation into the crisis and the release of anyone who may have been arrested.

The Independent Patriots for Change (IPC) in a press release demanded that the town council apologise publicly to the involved residents and compensate people whose houses have been demolished.