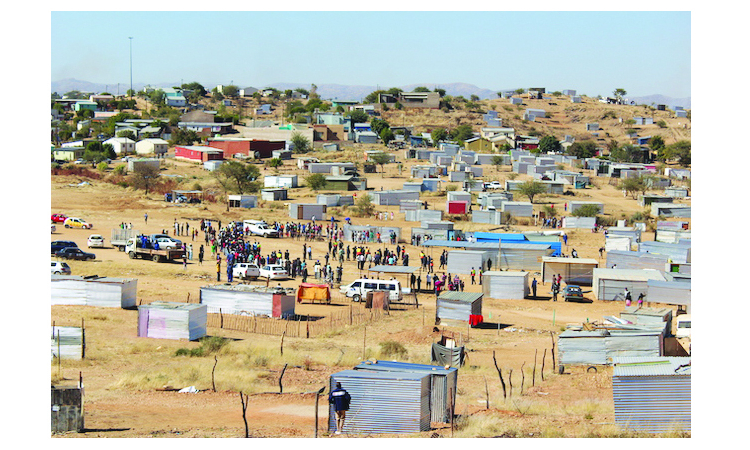 THE Namibia Housing Enterprise (NHE) says around 500 people who want to be part of the ongoing informal settlement upgrading project are currently being assisted.

Speaking to Desert Radio this week, the company’s spokesperson, Tuafi Shafombambi, said: “We have had about 500 clients who want housing but do not own land, but just because you do not qualify, we do not just let you go.

“We assist you in getting your papers, and also help you qualify for a house.”

Shafombambi said the project was founded in 2020, and aims to build 1 200 houses in total.

It also aims to address housing affordability as well as finding cost-effective ways of lifting people out of poverty.

She said while the NHE is trying to improve the provision of housing to the poor and middle-income earners, they have set their sights on building 1 200 houses for the low to medium-income earning bracket.

“Some people have been living on land that does not belong to them, because one of the requirements of this project is that one needs to show legal proof that you are the true owner of the land,” she said.

Shafombambi said to qualify for inclusion in the project, one has to earn between N$3 000 and N$5 000.

“People have been registering for the project, but the issue is that some of the applicants do not own the land they want to build on,” she said.

Meanwhile, Shack Dwellers Federation of Namibia (SDFN) regional facilitator Inga Boye says the federation has constructed more than 8 000 houses in the country with limited resources, even though affordable housing is a challenge among the urban poor.

She says the government has supported the federation with N$101 million which was used to construct 3 319 houses nationwide.

Boye says private stakeholders are supporting the federation. She says land delivery is one of the challenges of the federation – especially in Windhoek.

“Land delivery is very slow, but only in Windhoek. The limited resources the federation has, makes it a challenge to build more houses,” Boye says.

The federation is working in 31 informal settlements at 23 towns. This involves about 24 000 households which need land, she also said.

So far the government has given N$17 million towards informal settlement upgrading.

Ongwediva Town Council spokesperson Jackson Muma says the council is currently faced with a housing backlog of 5 000 units. He says the northern town council has been trying to clear the backlog through servicing land to cater for low-income and middle-income-earning categories.

Muma says the servicing of land has been a major stumbling block in the delivery of housing in the northern parts of the country.

He says they have so far identified erven that suit the three income categories to reduce the increasing housing backlog.

“The council has serviced Efidi Proper, which had 300 plots, and has noticed that once some of the people receive plots they are not paying them off. They can then allocate the plot to the next person on the waiting list,” Muma says.

Namib Mills price hikes to have ‘devastating impact’ on poor