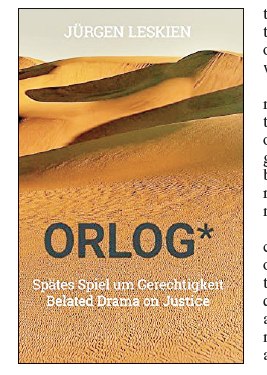 This is the question permeating the play ‘Orlog* Belated Drama on Justice’ by Jürgen Leskien, a German freelance author, journalist and theatre producer.

The play was originally written in German, and translated into English, with both versions published this year.

The highly emotive drama centres around calls for Germany to pay reparations for the gross loss of life, land and livestock during the Nama/Ovaherero genocide of 1904-1908.

The cast of characters includes descendants of those affected by the genocide, such as the elderly traditional Ovaherero chief Alfons Kaukamundu and radical Nama political and women’s rights activist Hilde Karamanda.

They form part of a greater Namibian delegation who travel to New York to sue the German government in an American court, in front of an unbiased jury, in a trial that includes some outspoken observers from former German colonies such as Togo, Cameroon and German East-Africa (Tanzania), among others.

‘Orlog*’ provides insight into Germany’s brutal colonial history and legacy of cruelty in Namibia, noting that the years between “1885 and 1908 are viewed as the most atrocious”.

Detailing the near extermination of the Ovaherero people from 1904, ‘Orlog*’ ensures even international audiences not well versed in some of the more gruesome details understand the reality faced by Ovaherero and Nama Namibians.

It explores the German order to shoot all Ovaherero women and children, the devastation at the concentration camps and the near slavery of being forced to work in the mines and railways.

The reality of that time is brought home to readers through Kaukamundu’s testimony relating his grandfather’s experience.

At the age of 15, Kaukamundu’s grandfather was already big and strong, when German land surveyors took over the family’s grazing land to build the railway from Windhoek to Swakopmund.

“To be precise: We built it. With our bones,” says Kaukamundu.

“They chased us from the cattle posts, the waterholes, even from the emergency grazing land. Cut it up in the exact way of the Germans. In rectangular shreds of five thousand hectares.”

Kaukamundu details the devastation that losing their prized grazing land had on the family and the people.

“Like the smell of bush fires, poverty still clings to our clothes… And the land of our fathers is still in the hands of whites.”

Karamanda also relates the experiences of her forbears, detailing her great-grandmother’s experience of forced labour in the yards close to the hospital, where soldiers packed human skulls into wooden boxes to be sent to the Anatomic Institute Berlin.

“They would cut the heads off the hanged. Nama women had to scratch the meat off the skulls. They took turns, my great-grandmother too. It went fastest with the pieces of broken beer bottles, they fit so well into the hand.”

Through Karamanda’s testimony, Leskien is able to verbalise the frustration of representatives of Namibian descendants of the genocide, after many years of not being able to reach a fair and just reparation settlement with the German government.

Exploring the repression of colonial history, Leskien says part of the moral to be drawn from the tragedy of the genocide is the quest to find answers to questions arising about the “possibility and necessity of reconciliation, guilt and forgiveness”.

He says the staged space allow different characters to tell their individual stories through “fierce speech and counter-speech”, allowing the spectator to “experience their existential affliction. The search for the meaning of individual pain…”

“The play stimulates equality and the diversity of voices, the adoption of an unbiased perspective,” says Leskien.

“It is a discussion on what politics seemingly cannot discuss. It articulates what historians and politicians are unable to say for various reasons.”

Leskien worked at the United Nations High Commissioner for Refugees camp for Namibian refugees in Cuanza Sul from 1983 to 1989. From 1990, Leskien worked in Namibia and was involved in repatriation of Namibian refugee children living in the German Democratic Republic. His experiences in Africa had a formative influence on his writing and journalistic work, and the continent became the main theme of his literary work.

While exploring important themes and giving voice to the inherent conflicts involved in bringing justice to a very painful period in the history of Namibia, the many language and editing errors in ‘Orlog’ were incredibly distracting for the reader.