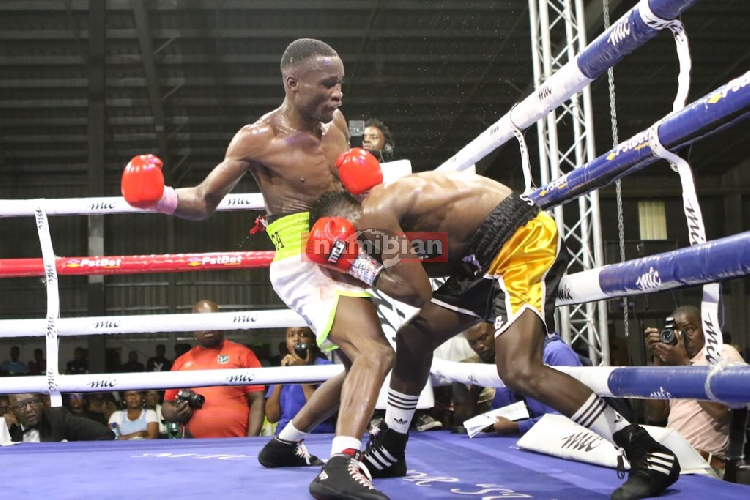 IT was a great evening for Namibian boxers at the Together as One Boxing Bonanza as they all retained their continental and international titles against foreign opponents at Ramatex on Saturday night.

Paulinus Ndjolonimus led the way with a devastating knockout of Delali Miledzi of Ghana to retain his WBO Africa super middleweight title, while Charles Shinima, Mateus Heita and Fillipus ‘Energy’ Nghitumbwa all gave impressive performances to retain their titles.

Ndjolonimus took a while to get going, seizing up his opponent in the opening rounds, while Miledzi had the Namibian crowd looking worried when he started picking up the tempo by the fourth round.

Ndjolonimus started landing some strong combinations by the fifth round, but Miledzi fought back bravely and going into the seventh round it was still anybody’s fight.

Ndjolonimus, however, took matters into his own hands in the seventh round when he landed a vicious left hook that knocked Miledzi out cold and sent him crashing to the canvas. Medical personnel rushed into the ring to revive him, and it took several minutes before he could return to his corner.

Saturday’s performance has now added to Ndjolonimus’ growing reputation as a knockout specialist and with 15 unbeaten fights and three defences of his WBO Africa super middleweight title under the belt, bigger things could be in store.

In the main fight of the evening, Nghitumbwa successfully defended his WBO Global Super Bantamweight title when he beat Sabelo Ngebinyange of South Africa on an 11th round TKO.

In an action-packed fight, the boxers had the crowd up on its feet by the second round as they slugged it out toe-to-toe in the centre of the ring.

Nghitumbwa set the early pace but Ngebinyange was strong on the counterattack and by the sixth round they once again slugged it out to the crowd’s delight.

Nghitumbwa maintained his relentless pressure, landing some powerful body shots as well and by the eighth round was well in control.

He sent Ngebinyange down to the canvas in the ninth, and although the South African beat the count, he didn’t last long, as his corner threw in the towel early in the 11th round.

Charles Shinima won his 15th consecutive pro fight when he retained his WBO Africa welterweight title with a sixth round TKO victory against Tiwo Olowu of Nigeria.

In a one-sided fight, Shinima took control of the fight from the outset, wearing the Nigerian down with his powerful combinations.

Olowu managed to land some good jabs, but he had no answer to Shinima’s power and decided he had had enough when he failed to come out for the sixth round.

Mateus Heita won his WBO/WBA Africa super bantamweight title with a sixth round TKO against Hassan Milanzi of Zimbabwe.

Milanzi landed some big shots early on but they hardly troubled Heita who moved up a gear to take control of the fight.

By the end of the third round he sent the Zimbabwean down to the canvas, and although he beat the count, he didnt last long as the referee stopped the fight in the sixth round.

The results of the other fights were as follows:

Andreas Shikongo beat Joseph Hihangwa on a first round TKO in their super middleweight fight.