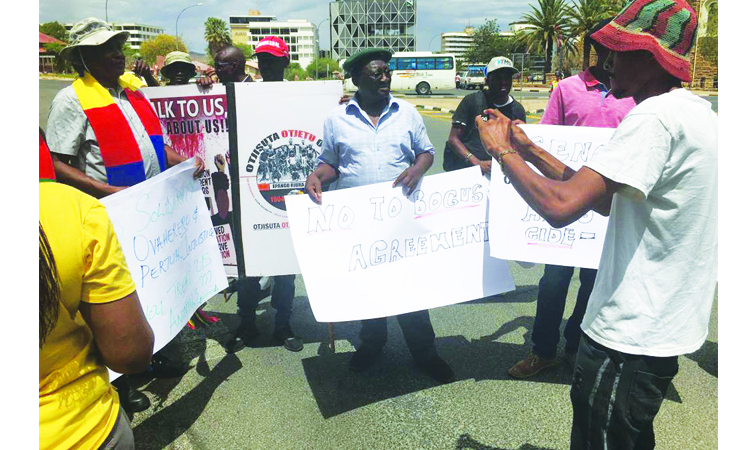 A GROUP of people from the Ancestral Land Foundation of Namibia (Aflon), who protested against ancestral land dispossession on Friday in Windhoek, say Germany can keep its blood-stained money and return their land.

Aflon communication socialist Sandie Tjaronda said the Ovaherero and Nama people are not demanding generous handouts from Germany or the Namibian government, but rather the return of their ancestral inheritance, including land, wealth and their heritage as rightful heirs, consistent with the collateral damage caused to affected communities.

“The Germans can keep their blood-stained money and give us our land back. We demand for the inclusion of the affected communities in the negotiations with the German government, including members of these communities in the diaspora, such as Botswana and South Africa,” he said.

Tjaronda said the Namibian government must desist from its pretentious manipulative ploys, and play a facilitating and oversight role to allow meaningful dialogue between the German government and representatives of the affected communities.

“Government cannot be the player and referee at the same time in this process. There must be clear and transparent segregation of roles in the dialogue,” he said.

Tjaronda said the Namibian government must impose a moratorium on all land with ancestral profiles with historical jurisdiction of the Ovaherero and Nama, for a just land dispute settlement to be attained.

“Any attempts by other tribal groupings to acquire land in the areas where dispossession and neo-colonial occupation in the former German South West Africa took place, should be viewed as a counter-productive measure to achieving restorative justice for the Ovaherero and Nama nation communities.

“Place all land reform (resettlement programmes) on hold for the next 24 months until all stakeholders have had an opportunity to deliberate on the fundamentals of land reform,” he said.

Aflon is also demanding fresh inclusive dialogue with affected communities within 60 days of receipt of the petition. “We give the custodian ministries in these matters raised, including the Ministry of Industrialisation and Trade, 90 days to facilitate consensus with relevant groups on the glaring inconsistencies raised by the petition,” he said.

India is Bucking the Trend

Tourism could be employment game changer