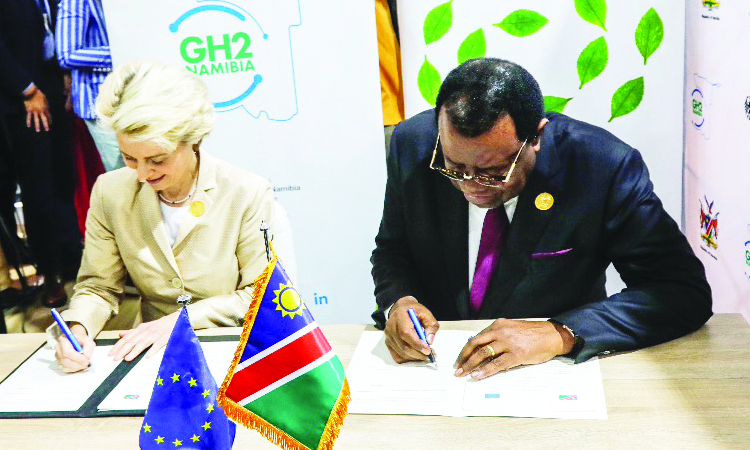 Processes beyond the conventional extraction of raw materials, such as the processing of extractive waste, the recovery and recycling of raw materials, and metal production from sea brines are also in the scope of this partnership.

The deal intends to facilitate investment and funding opportunities to modernise Namibian industries and drive economic and social development.

Furthermore, the agreement includes the development of open, fair and competitive markets for renewable hydrogen, allowing the EU to diversify its suppliers for materials necessary to achieve the green and digital transition and its open strategic autonomy.

The president of the European Commission, Ursula von der Leyen, said the partnership is not only a huge step forward for the EU’s climate ambitions, but is also beneficial to Namibia as a front-runner in the development of renewable hydrogen in Africa.

“It shows Europe’s commitment to working with partner countries on our shared commitments to a greener and more resilient future in line with the Global Gateway Strategy.

“This partnership is a key step in strengthening relations between the EU and Namibia, based on mutual trust, deepened political dialogue, and concrete cooperation projects,” Von der Leyen said.

Namibia will also be supported in developing an internationally competitive and sustainable industry in which beneficiated and value added minerals, both primary and secondary raw materials, become feedstock in the field of manufacturing semi-finished and consumer-end products both at home and abroad.

The EU and Namibia have committed to developing an operational roadmap for 2023/24, with concrete joint actions agreed within six months of signing the agreement.

These actions are to be carried out in close cooperation with relevant industrial and financial stakeholders from EU member states and Namibia.

The agreement will include capacity building, training and skills development along raw material and renewable hydrogen value chains, cooperation on research and innovation along the raw material value chain, including mineral knowledge and hydrogen technologies and skills.

In parallel the European Investment Bank (EIB) and Namibia yesterday signed a joint declaration to deepen their cooperation in support of renewable energy, including renewable hydrogen.

The EIB and Namibia will work towards the implementation of a loan by EIB Global to Namibia of up to N$9 billion.

The loan will allow for long-term sustainable projects and investments.

On 4 November, Namibia launched a green hydrogen strategy to, among others, ensure overall direction and cohesion between new policies needed for the industry, as well as existing legislative frameworks.

The strategy will establish an appropriate and fit-for-purpose structure to help develop the green hydrogen industry, and provide direction for planning, procuring, and monitoring future green hydrogen projects to be developed on state-owned land.

Through strategic economic diplomacy, Namibia has already signed agreements with companies from Germany, Belgium, The Netherlands and Japan.