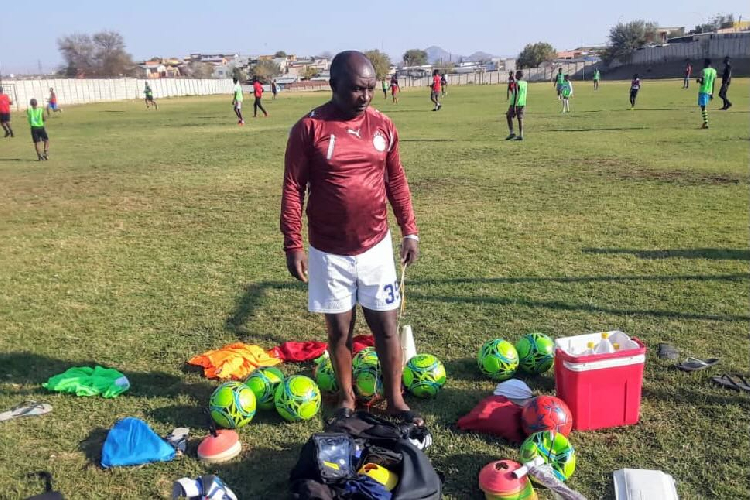 RETIRED footballer Immanuel ‘Sparks’ Gotlieb reckons that he made the best decision of his life when he switched from defence, where he was playing as a right-back, to goalkeeper, which accelerated his rise to the Eleven Arrows first team.

The versatile Gotlieb says he initially wanted to cuff himself a career as a defender, however, he heeded the advice of the Arrows hierarchy, who persuaded him to play as goaltender instead because of his athleticism and handling technique.

“When we were growing up, nobody really wanted to be a goalkeeper. We just enjoyed playing around with the ball. I did not have the nimble-footedness and skills of a striker or midfielder but I was very brave in the challenge and had a big intimidating physique.

“But, I can only thank my mentors at Arrows when they eventually turned my head against becoming a defender to play as a goalkeeper, and they told me of a bigger chance to play in the first team as a goalie,” he says.

It didn’t take long for the Kuisebmond-born star to become the coastal giants’ first choice goalie in 1982, but the cherry on top came when he was selected as the first choice goalkeeper for the pre-independence national selection team that played former South African giants Bush Bucks.

The game, although just a friendly, propelled his status as the country’s number one shot stopper, and he was selected as the man to guard the goals when the first national team was selected to engage a strong Zimbabwean side during the Independence celebrations in 1990.

The former Kuisebmond Inboorling Skool pupil, who started playing football at the age of seven, took a short break from the limelight when he went to attend school at Welwitschia Junior Secondary School at Khorixas and later Petrus Ganeb High School at Uis.

He was in command of the goalkeeper’s position at both schools before he returned to premier league football in 1987, after finishing school, surprising friend and foe when he turned out in the colours of Katutura giants Orlando Pirates.

“I don’t really know what prompted me to come play for the Buccaneers in the City of Light (as Windhoek is referred to) and was even part of the team that toured and played a few friendly matches in Angola, although it was just a brief spell.

“I was summoned back home to Walvis Bay by the Arrows management, which was actually a perfect time for me to rejoin because we won the Namibian Premier League and participated in the African Club Champions Cup against Arsenal of Lesotho.

“The two legged preliminary round matches showed that Namibian clubs were still not ready to play in the tough and financially draining competition but we were just too happy to be the first club from Namibia to play in the prestigious competition,” Gotlieb says.

It didn’t take long for the acrobatic goalie to jump ship and turn out in the colours of Arrows crosstown rivals, Blue Waters, with who he won the premier league in 1996.

“I must say that the news of me joining the Birds didn’t go off well with Arrows fans, especially my family because my elder brother Jeremiah Sadike Gotlieb was one of Arrows’ stars players, and as such it was considered a family team.

“However, the offer I received from Blue Waters was too lucrative to turn down because it included a job as well, at one of the big fishing companies. The situation was really growing tense at home and I made a lot of enemies, with my friends as well,” he notes.

Gotlieb insists that, although he was forced to return to Arrows after only a season with Blue Waters because of the circumstances at home, he does not regret his move to Arrows’ bitter rivals, which was purely influenced influenced by cash and a job.

Gotlieb also enjoyed cup tournament success with Arrows, which saw him lifting the JPS Knock-Out Special at the expense of Blue Waters while finishing as runners-up to both Orlando Pirates and Tigers in the Metropolitan Cup.

He played against Botswana and Mauritius before he finally retired from the game in 2009.

He says his biggest regret in football is turning down an offer from South African great Ephraim Jomo Sono to join Jomo Comsos in the South African Premier League.

“I just felt that because of the tension that existed between Namibia and apartheid South Africa, it couldn’t have been a wise move to go play professional football in South Africa. The thing is, my father was also very active during the liberation struggle and he was a respected member of Swapo. But I regret today that I refused the offer,” he says.

However, what Gotlieb missed as a player, he made up for by becoming the first professional goalkeeper coach in South Africa when he was assigned to train the goalkeepers of Black Leopards, before moving on to Maritzburg United. The trust the Castle Premier League clubs had in him paved the way for former Black Africa goalkeeper Ephraim Shihonge and Athiel Mbaha, who played for African Stars at the time, to join the paid ranks of South African football.

The married father of nine children (five girls and four sons) is still a fitness fanatic who works out every morning at 04h00. He has been married to his second wife, Maureen since 2007, after his first marriage to Maria from Ondangwa in 2002, unfortunately didn’t work out.

“I initially started a goalkeepers training clinic in 2021, and we were training at the Sam Nujoma Stadium at the time. However, the demand of young players, who can’t afford to pay for the academies in town, became big and we had to open up for open field players.

“I am now developing players from the age of 11 to 19, and it is not easy at all because I am in charge of all the age groups alone. I have invited a few former teammates to come and assist but they are reluctant due to a lack of sponsorship,” he says.

Despite these challenges, Gotlieb conducts coaching clinics on Tuesdays and Thursdays between 15h00 and 17h00 at the John Ya Otto Nankudhu Soccer Field in Wanaheda (opposite Oshakati Service Station) in Katutura.

The retired goalkeeper, who is very happy with his achievements on the football field, says it is heartening because some of the boys can’t even afford a pair of soccer boots or to pay their registration fees, but he sees this as his contribution and obligation to give back to the game that has made him so famous.

He advises young players to be serious “because football today is a business”.

“Stay focused and refrain from indulging in destructive habits like alcohol and drugs. Stick to one girl because womanising has shortened the careers of many good players in the past.”