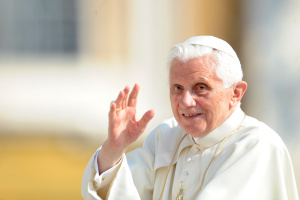 (FILES) In this file photo taken on September 28, 2011 Pope Benedict XVI waves to faithful as he arrives for his weekly general audience at St Peter’s square at The Vatican. Pope Emeritus Benedict XVI, a German theologian whose 2013 resignation took the world by surprise, died on December 31, 2022, at age of 95, the Vatican announced. (Photo by Tiziana FABI / AFP)

(AFP) – Former pope Benedict XVI has died at the age of 95, the Vatican announced Saturday, almost a decade after he became the first pontiff to resign in six centuries.

“With sorrow I inform you that the Pope Emeritus, Benedict XVI, passed away today at 9:34 in the Mater Ecclesiae Monastery in the Vatican,” spokesman Matteo Bruni said in a statement.

He later told journalists the funeral would take place on Thursday, January 5, at St Peter’s Square, presided over by his successor Pope Francis.

Benedict had shocked the world in 2013 when he became the first pope since the Middle Ages to step down, citing his declining mental and physical health.

His death brings to an end an unprecedented situation in which two “men in white” — Benedict and Francis — had co-existed within the walls of the tiny city state.

Tributes poured in for a brilliant theologian who found himself overwhelmed by the responsibilities of leading the Catholic Church, particularly as it battled a worldwide scandal over clerical child sex abuse.

“Pope Benedict was one of the greatest theologians of his age –- committed to the faith of the Church and stalwart in its defence,” said Archbishop of Canterbury Justin Welby.

Chancellor Olaf Scholz, of Benedict‘s native Germany, hailed “a formative figure of the Catholic Church, an argumentative personality and a clever theologian”.

The Vatican said Benedict‘s body will be displayed from Monday morning in St Peter’s Basilica to allow the faithful to pay their respects, ahead of a “solemn but simple” funeral later in the week.

Big screens in St Peter’s Square on Saturday morning announced the closure of the basilica and the square from lunchtime, prompting confused holiday visitors to reach for their phones and see the news.

“We are distraught,” said Davide Di Tommaso, 30, from the southern Italian region of Molise, adding: “He was truly a great pope.”

The German pope emeritus, whose birth name was Joseph Ratzinger, had been living a quiet life in a former convent inside the Vatican grounds since his resignation.

His health had been declining for a long time, and he had almost entirely withdrawn from public few when the Vatican revealed on Wednesday that his situation had worsened.

That same day, Francis called for Catholics worldwide to pray for him and he received the last rites, a Catholic tradition for the dying.

Benedict is the first pope to die since the long-reigning and popular John Paul II, whose funeral mass in 2005 in St Peter’s Square drew an estimated one million people, including heads of state.

Benedict was pope for eight years between 2005 and 2013, a period marred by Vatican in-fighting and the scandal over clerical abuse and decades of cover-ups.

The abuse scandal overshadowed his final months after a damning report for the German church in January 2022 accused him of personally failing to stop four predatory priests in the 1980s while archbishop of Munich.

He denied wrongdoing and the Vatican strongly defended his record in being the first pope to apologise for the scandals, who expressed his own “deep remorse” and met with victims.

Born on April 16, 1927 in Marktl am Inn, in Bavaria, Benedict was 78 when became the first German pope of the modern era. He later said his election felt “like the guillotine”.

Unlike Francis, a Jesuit who delights in being among his flock, Benedict was a conservative intellectual dubbed “God’s Rottweiler” in a previous post as chief doctrinal enforcer.

Italian Vatican observer Marco Politi hailed his legacy as a theologian but told AFP that “he didn’t have the mental strength to be pope“.

His papacy was dogged by controversy, from comments that angered the Muslim world to a money-laundering scandal at the Vatican bank and a personal humiliation when, in 2012, his butler leaked secret papers to the media.

Despite saying he would live “hidden from the world” after his resignation, he repeatedly intervened on key issues facing the Church through books, interviews and articles.

In January 2020, he expressed his opposition to allowing priests to marry. A year earlier, he blamed clerical abuse scandals on the 1960s sexual revolution and a collapse in faith in the West.

In an interview in March 2021, he said “there is only one pope“, but acknowledged “fanatical” supporters who refused to accept his resignation.