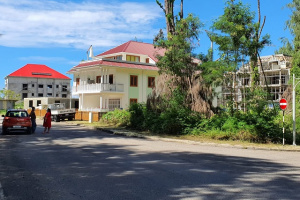 The former chairman of the board of 2020 Development Seychelles Ltd has refuted claims of corruption in the company with regards to the Ile Soleil project and denies any wrongdoing.

The former chairman, Barry Faure, made reference to comments made by Seychelles’ President Wavel Ramkalawan in his press conference last Friday.

Ramkalwan said that the cabinet of ministers had considered the Vocational Training School which was supposed to be built on Ile Soleil.

“What we discovered was a total disorder; that, the piece of land which had been earmarked for this Vocational Training Centre, not only that it was not big enough, but, secondly it is hollow because certain people there in the midst of all the corruption and everything else, they are removing soil. So, where we are going to build this Vocational Training School is a matter that we are still preoccupied with,” he added.

In reply to this statement, Faure stated in his letter that he was baffled to hear the President say that certain people have been removing earth from the school plot.

“I do not know from where and how he gets his reports, because should anyone visit the school plot now, one will find the school plot generally level. On the contrary, there is a stockpile of coral fill that the previous administration had kept for development purposes and needs of the Ile Soleil project. These were used always under specific written permits issued by the management,” explained Faure.

He told SNA on Friday that in making these remarks, the President has contradicted himself since in the same press conference, he said that nobody should be spreading false information and misleading the population.

“The President spoke of the need to let due process take place before making assumptions on national issues, and so I ask myself why then did he make these remarks about the Ile Soleil project in the first place when it is not based on the actual facts,” explained Faure.

The 2020 Development (Seychelles) Ltd is a government-created company with the mandate to implement a range of infrastructure and property development projects, by engaging the private sector to take ownership of various national endeavours.

Faure was the chairman of the company from 2012 up until 2021, when a new board was appointed to head the company and to continue with the works on the Ile Soleil project.

The aim of the Ile Soleil project is to develop a residential and commercial area on reclaimed land on the east coast of Mahe near the Seychelles International Airport.

Faure also made reference to remarks made earlier this year by the Minister for Investment, Entrepreneurship and Industry, Devika Vidot, in the National Assembly, where it was alleged that there was a lot of malpractice in regard to the project.

Vidot highlighted issues such as individuals benefiting from large pieces of land during the time they were working for the company, compromises made on certain structures on the island which now require reparation and decisions taken without the government’s authorisation.

“For example, in May 2021, a contract was made with a high official of the 2020 Development without following proper procedures as stated in the laws of the Public Enterprise Monitoring Commission (PEMC),” Vidot told the National Assembly.

Faure categorically denied any wrongdoing and that no plot was sold to any high official of the company in 2021.

He told SNA that in the 2020 Audit report done on the company, there are no issues that point to corruption or mismanagement and that such comments should not be made until a proper inquiry is done and a report is presented.

“In fact, 2020 Development has never used any public funds to develop Ile Soleil,” explained Faure, who stated that when the company was set up, it was agreed that it would need to generate funds through investors, which would then allow them to build the necessary infrastructures on the island.

“In regards to the lease of the big tourism plot made to a consultant of the company in 2016, there was no corruption involved at all,” said Faure, who explained that there were issues with finding investors for that particular piece of land since 2012 and the consultant working with the company proposed in mid-2015 that he invests in this land.

“We needed to raise money in order to continue the project, so we continued to make offers to other investors, but in the end, we decided to award it to the consultant for a competitive price. To avoid any conflict of interest, we did not include him in any meetings held in regards to that particular plot, which he was investing in. However, he did sit for meetings on other issues as the consultant,” said Faure.

He said that everything was done in line with their mandate, government policy and their own tender policy, which had been approved by the government since the early days of 2020 Development (Seychelles) Ltd.

Faure said that these allegations are not appreciated by the former board members and management of the company and that they affect their reputation.

He said that this new government administration does not appreciate the work that they have done on Ile Soleil, without spending any taxpayers’ money, yet the value of the assets there can easily stand above $24 million (SCR 314 million).