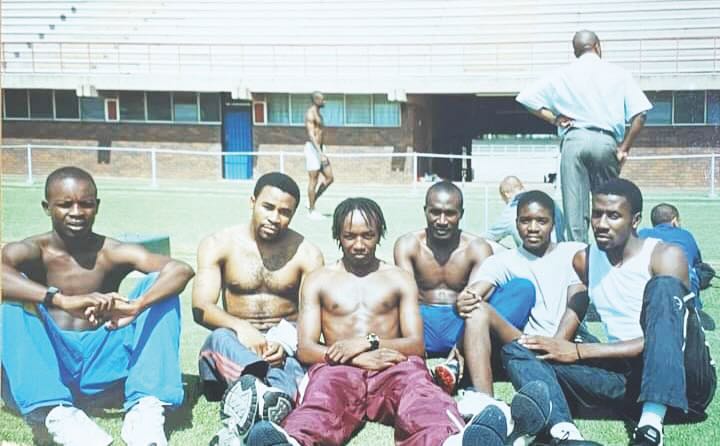 FORMER amateur lightweight boxing champion Nicanor ‘Nicky’ Natangwe has come a long way from representing Mandume Primary School at under-10 football level before he turned out for Future Boys in the Khomas First Division to become a national boxing champion.

“I have been playing soccer since my childhood at Katutura, and I started playing organised football at junior level for Mandume Primary School.

“I went on to play as a midfielder for Future Boys in the Namibia Football Association(NFA)-affiliated Khomas First Division.

“I also trained with Hotspurs a few times before I was introduced to boxing by my good friend Jason ‘Taks’ Naule,” Natangwe says.

The former national lightweight champion was invited by his childhood friend and former World Boxing Association (WBA) pan-African welterweight champion Naule to try out at the renowned Central Boxing Club under the tutelage of Mistake Gariseb at Katutura.

He says he just fell in love with boxing after a few training sessions, and took the compliments from trainer Gariseb that he was a good fighter seriously.

“I started boxing seriously under Gariseb in 1995, and found myself challenging for the national welterweight title within a short time.

“I couldn’t believe it when I won the Namibian lightweight title, and the turning point came after I was named best boxer of the tournament during the Zone Six Boxing Championships hosted by Botswana in Kang in 2001,” he says.

Natangwe, who was renowned for both his boxing skills and his endurance, says his best boxing moment was when he first knocked out Paulus ‘Hitman’ Moses during their first fight, before he went on to beat the former WBA light champion on points in the return fight.

The orthodox boxer, who went on to represent the country at the 2002 Commonwealth Games in Manchester in England where he claims to have fought the best fight of his stellar amateur career, was also respected for his devastating left-hook.

“The left-hook was definitely my best punch. I have floored several good fighters with that punch by reaching the quarter-final round at the Commonwealth Games, where I lost out to an opponent from Botswana.

“I may have lost the quarter-final fight, but I really gave it my best shot to lose on points. I reached another milestone when I got another chance to represent my country at the All-Africa Games in Nigeria, but I couldn’t fight after dislocating my shoulder,” he says.

Natangwe also has a history with the national boxing team, and he speaks fondly about his trips to Botswana, South Africa and Zimbabwe to participate in Zone Six Games which exposed him to top amateur boxers from southern Africa.

The former hard-hitting star was forced to hang up his boxing gloves after his injury setback, and was eventually approached to work at the Mistake Gariseb Boxing and Fitness Academy.

“I don’t ever regret choosing boxing over football, because I was very good at boxing. I really enjoyed my one-on-one moments with boxers who were equally talented. You only have yourself to blame in boxing, because it is an individual sport.

“It was always a wonderful feeling to win against excellent boxers like myself. However, I have made sure my success as a champion boxer haven’t gone to my head. I have always been a level-headed person,” he says.

He believes everything happens for a reason, he says.

Natangwe, who is still single, has four children and has been working at the Ministry of Gender Equality, Poverty Eradication and Social Welfare since 2006.

“I am employed by the government as an administration and general worker, and procurement officer. I am doing a crucial job in the ministry. It is a very interesting job that requires a clear mind and consistency.

“One of my most important duties is to order stationery and furniture for our ministry, meaning I have to evaluate supply options, approve purchases and maintain accurate records. This job also requires an analytical mind,” he says.

“There are sometimes misunderstandings, but I can proudly say I am working in a wonderful environment with very cooperative colleagues and good bosses,” he says.

The retired boxer says although he misses the ring and camping while on tour, he is happy with the way his life has turned out.

“I may have quit boxing, but I have still been very involved with the sport as a professional coach with the MTC Nestor Sunshine Tobias Boxing & Fitness Academy since 2020 after I broke ties with my former mentor, Mistake Gariseb.

“I am very lucky to be working with a professional and knowledgeable person like Nestor.

“He is passionate about boxing and a wonderful motivator. He prepares boxers well mentally as well,” he says.

Natangwe says their academy is renowned for producing world-class boxers who have made Namibia proud by bringing big world titles back to the country in the past.

His advice to young aspirant boxers is to be committed to their sport and to listen attentively to their trainers and mentors.“The biggest thing hindering Namibian sportsmen and women in general is the abuse of substances.

“Today’s young people are lucky they have technology which can help them shape up their careers in a very positive way,” he says.