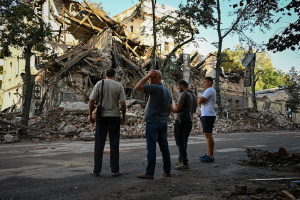 (AFP) – Intense fighting was raging on Tuesday across the southern Ukrainian region of Kherson occupied by Russia, Kyiv’s presidency said, as its troops pressed counter-offensives “in various directions”.

Most of region of Kherson bordering the Black Sea — and its provincial capital of the same name — were seized by Moscow’s military at the start of the invasion six months ago.

With the war in the eastern Donbas region largely stalled, analysts have said for weeks that combat is likely to shift south to break the stalemate before winter comes.

But much of the attention remained on the counter-offensive in the south.

In its morning update the president’s office in Kyiv said “heavy fighting is taking place in almost the entire territory of the Kherson region”.

“Powerful explosions continued throughout the day and throughout the night” and “the Armed Forces of Ukraine launched offensive actions in various directions,” it added.

In his nightly address on Monday, President Volodymyr Zelensky was coy about Ukraine’s overarching strategy whilst striking a bullish tone.

“We shouldn’t betray our troops by giving information about any of our plans,” he said.

“You won’t hear the specifics from any person in charge because this is war, and that’s how this works.”

“But the occupiers should know that we will push them to our borderline,” he added.

“If they want to survive, it is time for the Russian military to flee. Go home.”

But it warned that since the start of August, Russia has made “significant efforts” to reinforce troops on the western bank of the Dnipro River which splits Kherson city.

“It is not yet possible to confirm the extent of Ukrainian advances,” the ministry said on Tuesday.

“The Russian occupiers shelled the central districts of Kharkiv,” Synegubov said on Telegram, as he warned residents to “stay inside the shelters”.

Moscow’s troops seized Kherson, a town of 280,000 inhabitants, on March 3. It was the first major city to fall following Moscow’s invasion of Ukraine on February 24.

In an update on Facebook early Tuesday, Ukraine’s Southern Command said the situation remained “tense” in its area of operations.

“The enemy attacked our positions five times, but was unsuccessful,” it said.

The city of Mykolaiv, just northwest of Kherson, had come under “massive bombardment” from Russian anti-aircraft missiles, with two civilians killed and 24 wounded, it said.

On Monday, Russia’s defence ministry claimed it had repulsed attacks in the Kherson and neighbouring Mykolaiv regions and inflicted “heavy losses” on Ukrainian forces.

The ministry said Ukraine’s troops attempted attacks in “three directions” but that they lost more than 560 servicemen and 26 tanks.

“Another attempt at offensive actions by the enemy failed miserably,” the ministry said.

“The Russians have had to pull resources from the east simply because of reports that the Ukrainians might be going more on the offence in the south,” Kirby told journalists on Monday, CNN reported.

Meanwhile, a senior Pentagon official said Russia was struggling to find soldiers to fight in Ukraine and that many new recruits were older, in poor shape and lacking training.

Seychelles Kanabis Association launched to lobby for legalisation of cannabis use