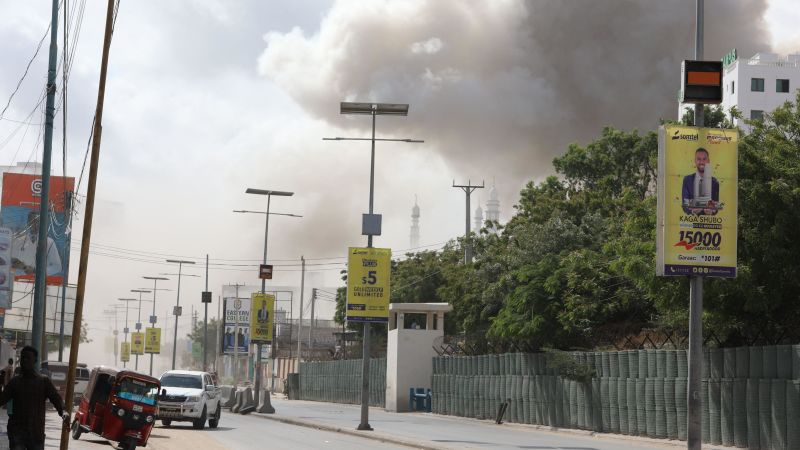 At least 100 people were killed after two car bombs exploded near Somalia’s education ministry in the capital Mogadishu on Saturday.

More than 300 others were wounded in the attack, said Somali President Hassan Sheikh Mohamud in a video statement posted on his official Twitter account.

Mohamud claimed the al-Shabaab terror group in Somalia was responsible.

“Today’s cruel and cowardly terrorist attack on innocent people by the morally bankrupt and criminal al-Shabaab group cannot discourage us but will further strengthen our resolve to defeat them once and for all,” Mohamud wrote on Twitter.

There was no immediate claim of responsibility for the attack, but the Islamist group al-Shabaab has claimed other recent attacks.

“Our government and brave people will continue to defend Somalia against evil,” Mohamud added.

The two car bombs exploded near a busy intersection in the capital and near the Ministry of Education, according to an official with the president’s office.

The intersection, Zobe junction, was the same location as a deadly bombing attack on October 14, 2017, which killed more than 500 people and injured around 300 others.

“By the will of God, no other October like this will happen. They won’t get the chance to commit such a thing,” Mohamud said, calling Saturday’s attack a repeat of the 2017 bombings.

Mohamed Moalim, who owns a restaurant near the ministry, said his wife, Fardawsa Mohamed, a mother of six, tried to help victims of the blast.

“We failed to stop her,” he told Reuters. “She was killed by the second blast.”

Mohamud said those who were injured were in a serious condition and the death toll could rise.

“Our people who were massacred … included mothers with their children in their arms, fathers who had medical conditions, students who were sent to study, businessmen who were struggling with the lives of their families,” he said after visiting the scene, Reuters added.

Abdullahi Aden said his friend, Ilyas Mohamed Warsame, was killed while travelling in his three-wheeled “tuk tuk” taxi to see relatives before returning to his home in Britain.

“We recognized the number plate of the tuk tuk, which was now rubble,” Aden said.

“Exhausted and desperate, we found his body at midnight last night in hospital,” he said. “I can’t get the image out of my mind.”

At least 16 dead as heavy rains trigger landslides in Uganda

‘She sat for him 12 times’: The Nigerian artist who made a bronze sculpture of Queen Elizabeth II