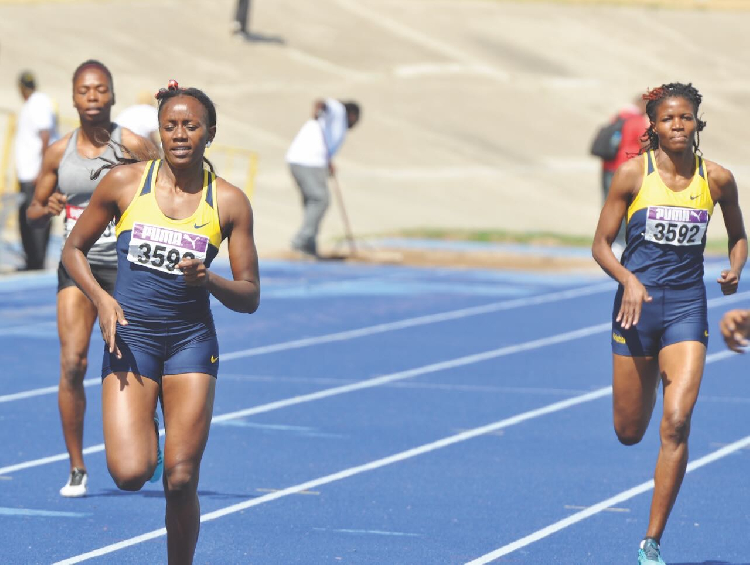 GLOBINE Mayova was one of the most recognisable female sprinters Namibia ever produced.

Born and bred at Grootfontein, she specialised in the 200m sprints, although she also used to dominate the women’s 100m dash.

It is surprising that Mayova never qualified for a prestigious event like the Olympic Games, despite her serial record-breaking antics at national level.

She first showed her devastating form at an international meet in Mauritius in 2012 where she, despite coming second behind Louami Carima of France, set a new Namibian record for the first time at 11,76 seconds.

“I enjoyed proving to my critics that all my previous achievements were not a fluke by repeating the feat during the Athletics Gauteng North (AGN), youth, junior and senior league meeting at the University of Pretoria in South Africa.

“I won both sprints during the event, but it was in the 200m, which is actually my favourite event, that I improved my old record of 23,39 with a faster 23,34 seconds.

“But despite my good showing, I couldn’t meet the 23,30 to qualify for the IAAF World Championships,” she says.

Mayova’s record in the 200m stood for eight years before it was improved by Beatrice Masilingi at the AGN League 4 in Pretoria, South Africa, in 2020.

Mayova first participated in the 800m and 1 200m races at school before she was converted to run the 200m and 400m by her coach, Letu Hamhola, at Welwitchia Athletics Club in 2006 after she moved to Windhoek.

She also set the 60m national record at 6,64 seconds in 2012 at the World Indoor Championships in Istanbul, Turkey, which was later improved by Keisha Kalomo in a new time of 6,57 seconds in Jamaica in 2016.

Mayova, who wants to be remembered as a disciplined and dedicated sprinter, is not entirely out of the records game as the 4×400 relay record of 3:40.21 she set at the IAAF Relays in Nassau, Bahamas, in 2015 is still standing and it doesn’t look like it will be bettered soon.

The retired sprinter, who based her races on endurance and speed, says despite her exceptional showing she was not approached by any other country to run under their flag.

“I really tried to run every race I participated in as my last. I gave as much I could, but without world class training facilities and a lack of proper support by the government and other stakeholders in the athletics code, we could just not turn into world beaters.

“In countries like Jamaica, where we spent a few years training, athletics is considered as a very important code. Even the primary and secondary school events are organised in such a way that they look like top-class international events.

“The athletes feel appreciated,” she says.

Namibia had top athletes in the past, but they ended up giving up on the sport because of a lack of support by athletics officials, she says.

Mayova, whose achievements on the track was rewarded with a most improved woman of the year award by the Namibian Sports Commission, says she was deeply hurt after she was denied an opportunity to compete at the Olympics.

“My biggest disappointment as an athlete was not being able to run at the Olympic Games. I wanted to be an Olympic medallist.

“I missed the qualifying time of 20,13 seconds by only a hundredth of a second, but instead of giving me a wild card, the powers that be gave the wild card to someone else. Someone whom I have beaten, and that hurts until today,” she says.

The single mother of three daughters has been employed by the Namibian Police since 2013.

“When I started working at the Windhoek Police Station, I was doing duty in operations and I was mostly on night shift. We were patrolling the streets of Katutura as part of the crime-prevention department of the police.

“It was nice because we created a sense of security for the public.

“We were also tasked to identify and solve community problems with respect to crime and disorder. It was fine, because we received training for that purpose,” she says.

Mayova, who is currently doing duty at the charge office of the Wanaheda Police Station as a sergeant, says although fun at times, police work also has its challenges – especially when dealing with dead bodies or chasing suspects in the informal settlements.

“It can be very tricky and dangerous – especially when it’s dark. That person you pursue could easily hide in the darkness and hurt you if they are armed,” she says.

The former sprinter mentions Hamhola, whom she considers as a father figure, as the person who had the biggest influence on her athletics career.

She is not completely lost to sport though, as she is currently playing centre position for the Otjozondjupa Nampol NC in the national MTC Netball Namibia Premier League.

She has also played for Dynamos from Grootfontein and Eastern Swallows from Epukiro village.

Mayova’s advice to aspiring young athletes is that they should “train hard, always listen to their coaches, abstain from destructive substances like alcohol, and always pursue their dreams with guts and determination”.