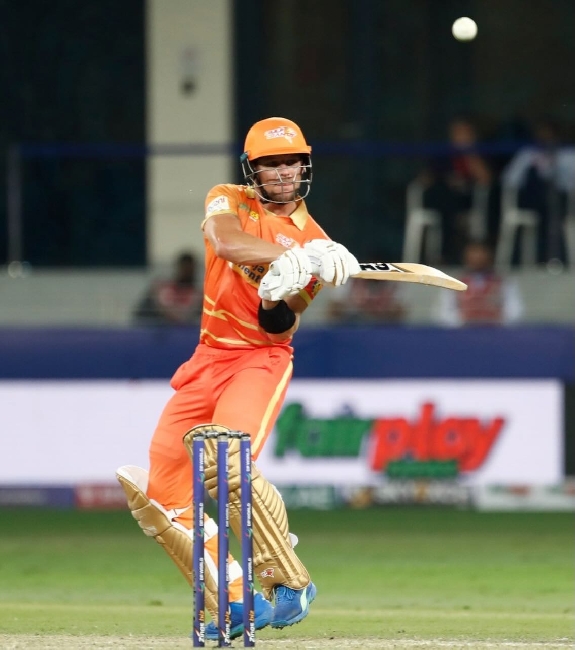 GERHARD Erasmus was in great form on Monday when he helped his team, the Gulf Giants, to a six-wicket victory against the Dubai Capitals in the UAE International League T20.

Erasmus hit 52 runs off only 28 balls and shared a century stand with man-of-the-match James Vince to steer his team to their second successive win of the tournament.

After being sent in to bat, the Dubai Capitals got off to a flier through Robin Uthappa and when Joe Root was run out for 6, Uthappa was already on 64.

Uthappa was eventually dismissed by Namibian David Wiese for 79 off 46 balls, but there were also good contributions from Rovman Powell (38 off 25 balls) and Sikandar Raza (30 not out off 19) as the Dubai Capitals reached a formidable 182/8 off their 20 overs.

In the Giants’ reply, James Vince and Rehan Ahmed shared a 43-run partnership, but then lost two wickets in three balls, and when Erasmus joined Vince at the crease they still had a long way to go.

Erasmus took a while to get going, playing second fiddle to Vince, but by the 11th over hit successive sixes off Dasun Shanaka to move up to 22 and take the total to 91/2.

Their partnership grew in stature, with Vince reaching his 50 off 39 balls, while Erasmus raced to his 50 off only 28 balls.

He was unfortunate to lose his wicket, run-out at the non-striking end for 52, but after a 107-run third wicket partnership and with the score at 152/3 with four overs remaining, the momentum was now with the Giants.

Vince guided the Giants to victory scoring 83 not out off 56 balls, while Wiese added seven not out as the Giants reached the winning target with six balls to spare.

Vince, who won the man of the match award, paid tribute to Erasmus’ fine knock after the match.

“Rehan (Ahmed) played a lovely cameo and Gerhard (Erasmus) was playing beautifully around me and I was able to pick up. Sometimes you have to respect the bowlers and then catch up at the end. The way Rehan played meant I did not take risks early on. Without those cameos around you, you have to play high-risk cameos early on so that made my life easier,” he said.

Erasmus, meanwhile, speaking on the Gulf Giants’ Instagram channel said he took his time to settle in.

“I was just trying to get used to the wicket in the first five or 10 balls, to set a good foundation. I think it was a good wicket, but the ball also seemed to be swinging a bit more, so I took my time and with Vincie I had lots of time to catch up and once we set that foundation it came quite easily,” he said.

Erasmus also hit some innovative boundaries with scoops and reverse shots and said it was done instinctively.

“I think you play your best cricket when its instinctive and you just make a decision on the spot, to be able to go with the momentum and start playing really instinctively – I’m lucky it came off for me tonight.”

It was the Giants’ second successive win in the competition which takes them to the top of the log on four points, followed by the MI Emirates, the Desert Vipers and the Dubai Capitals who are all on two points.

The Sharjah Warriors and the Abu Dhabi Knight Riders prop up the table on zero points each.

Icelanders lose second round against PG