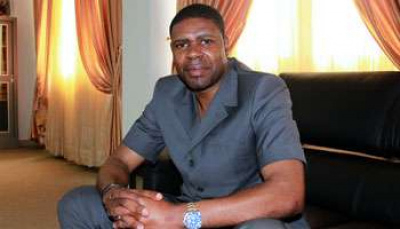 On 18th January, state TV channel Televisión de Guinea Ecuatorial (TVGE) reported that the son of the country’s President had been placed on house arrest and then transferred to police custody following the unauthorised sale of one of the national carrier’s aeroplanes.

Ruslan Obiang Nsue, the son of President Teodoro Obiang Nguema Mbasogo, reportedly sold an ATR 72 belonging to CEIBA Intercontinental to Spanish aviation maintenance company Bintertechnic. Thereafter, Nsue was said to have kept the proceeds of the sale for himself.

The arrest was ordered by Nsue’s half-brother and the country’s sitting Vice President Teodoro Nguema Obiang Mangue, who was said to have been enraged upon discovering the unlawful sale.

“Ruslan Obiang has confessed that he was the person who sold Ceiba’s ATR, I will not allow myself to be carried away by familialism or favouritism, which is why I have ordered his immediate arrest, custody and the proposal to terminate his duties,” announced Vice President Mangue via his Twitter account.

The ATR 72-500, a turboprop regional airliner, reportedly went missing during a routine maintenance procedure at Bintertechnic’s facility in Gran Canaria, Spain. However, it is yet to be confirmed that Bintertechnic was the buyer of the aircraft.

Corruption and lawlessness seems to be a family affair for the Central African country’s First Family.

Ironically, Vice President Mangue, nicknamed Theodorin, has had his fair share of sanctions and public admonitions.

Just in 2021, Mangue was sanctioned by the UK for misappropriating public funds worth millions of dollars. He was said to have used the money to obtain luxury mansions, a collection of luxury cars, private jets and a $275,000 glove worn by late icon Michael Jackson.

Then UK Foreign Secretary Dominic Raab said Mangue had solicited bribes and been a part of corrupt contracting agreements to “fund a lavish lifestyle inconsistent with his official salary as government minister”.

5 years prior to that, Mangue received a 3-year suspended jail term and a suspended fine of €30 million by a French court on charges of corruption. Several of his high quality possessions, including 17 luxury cars, were also seized.

In 2016, another collection of luxury cars was seized by Swiss authorities following a corruption investigation. The cars were eventually sold off in a 2019 auction, where they raked in 23.4 Million Swiss Francs ($25.4 Million).

Between 2011-2012, Mangue was also investigated by the US, A revised statement by the United States Department of Justice stated that he spent $315 Million on properties and luxury goods between 2004 and 2011. At the time, his official salary per annum was less than $100,000.

After 43 years on the country’s ultimate seat of power, President Teodoro Obiang Nguema Mbasogo himself holds the record for the world’s longest ruling president, a feat he has only been able to achieve as result of continued corruption and authoritarianism.

Rights groups have dubbed President Mbasogo one of the worst rights abusers in Africa and under his leadership, Equatorial Guinea has consistently held one of the worst human rights records in the world. In 2021, the oil-producing former Spanish colony ranked 172nd out of 180 countries on the Transparency International Corruption Perceptions Index.

Why Has Airbus Chosen The A380 For Hydrogen Engine

Zimbabwe Passes a Bill that Aims to Punish Unpatriotic Citizens | The African Exponent.

THCO Explained: What Does It Mean? | The African Exponent.

The Complete Guide to Unity and What Makes it So Popular | The African Exponent.