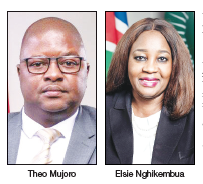 The police are investigating the alleged theft of 117 laptops from the Electoral Commission of Namibia (ECN).

ECN chief electoral and referenda officer Theo Mujoro yesterday confirmed registering a case with the police over the laptops stolen from their head office.

“A case has been registered with the Namibian Police and the matter is now subject to a criminal investigation,” Mujoro said. Police spokesperson deputy commissioner Kauna Shikwambi yesterday said they are following up on the case. ECN’s chairperson Elsie Nghikembua yesterday told The Namibian that she will provide a response today.

However, The Namibian is informed that 117 of 137 laptops have gone missing. The laptops were allegedly stolen between November 2020 and early this month, when the missing laptops were noted.

Mujoro has refused to reveal the value of the stolen laptops.

“The ECN understands the sensitivity and urgency of this unfortunate event and will keep electoral stakeholders and the public informed on any further development concerning this matter,” he said.

Mujoro said no data security breaches were committed as a result of the theft.

“The ECN has immediately launched an internal investigation and responsible persons will be held accountable,” Mujoro said.

South West Africa National Union president Tangeni Iijambo said he suspects the issue of missing laptops is an inside job committed by people who are in cahoots with the ruling party to rig elections next year.

“It’s an unprecedented move. The number of missing laptops is huge and it’s unacceptable,” he said.

This is not the first time laptops have gone missing from the ECN. In 2019, the ECN accused its former technical director, Milton Louw, of stealing five laptops from the commission.

Louw was accused of stealing the laptops and trying to sell them at a pawnshop in Windhoek.

Louw yesterday admitted that he took five new laptops from the ECN offices, but denied that he attempted to sell them at the pawnshop.

He claimed he only took the laptops after discovering that the ECN system had been hacked by someone who “stole the votes”. He claimed his intention was to prove that vote-rigging took place during the elections.

“We were hacked. I don’t know by who or how. Something went wrong. And I was told to look into it by the chief electoral officer [Mujoro]. That is all I can confirm at this moment – that somebody messed with our system at 15h19 on 30 November 2019, and they stole votes from everybody equally at the same time,” Louw claimed.

He added that when he found out that somebody “stole the votes”, he informed the police and accompanied them to collect the laptops from the ECN offices.

Louw claims he showed the evidence of how the ECN system was manipulated to several people.

“They [police] took down all the [laptop] serial numbers,” he noted.

“Somebody has made me look very bad, and it now appears as if I was trying to steal them [laptops]. To do what with them?”

In 2017, two electoral voting machines (EVMs) went missing after they were given to Swapo to use at the party’s elder’s council congress.