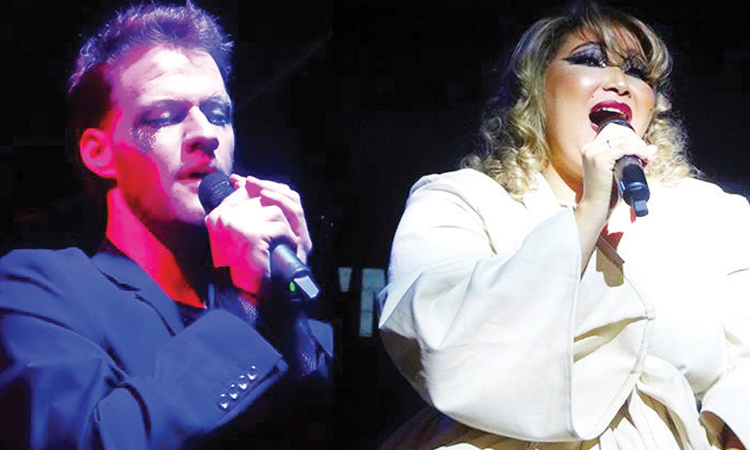 IN Windhoek, theatre on a Sunday afternoon is the strangest of things.

Matinees are rare. Lately, theatre is just as mythical, but on an odd, late October afternoon Lize Ehlers and Sven-Eric Müller invite us back to the boards at the once fizzy Warehouse Theatre.

The title on the playbill is ‘Guts & Glory’, a musical exploration through song that weaves between show tunes and angsty pop ballads in a millennial mash-up devoted to the crests and falls inherent in being an artist.

After the ravages of the ongoing pandemic, for creatives gathered into the crumbling theatre, ‘Guts & Glory’ is a mirror reflecting the struggle, disillusionment, exhaustion, imposter syndrome, grief, denial and mental health challenges that may arise when pursuing a career in the arts – even more so when the creative industries are so criminally undervalued.

Created by Ehlers and Müller as a reflection of their own experiences but also as a balm and a space to weep for those who flock to one of a handful of theatre productions the city has seen this year, ‘Guts & Glory’ is a vital and gutsy offering presented as collective catharsis.

To this end Ehlers, a renowned singer, digs deeper than audiences have ever seen.

Müller, celebrated locally as a ballet dancer and choreographer who occasionally bursts into song, switches focus and highlights his prowess as a singer with roles such as Diesel in ‘West Side Story’ at the Fugard Theatre (Cape Town) to his name.

Growling and raging through ‘They Just Keep Moving the Line’ and smouldering in a rendition of Peggy Lee’s ‘Fever’ and Amy Winehouse’s ‘Back to Black’, Müller, still all smooth lines and marvellous movement, ushers in his singing persona with verve, in barely there black costuming and fishnets and with raw vulnerability that runs through the duo’s sometimes humorous yet bittersweet invitation to fall apart.

Ehlers and Müller’s mission is accomplished.

They are, in a word, glorious.

The audience weeps, it sings quietly along, and in the afterglow in the Warehouse Theatre courtyard the stories of struggle, worsened by the pandemic, are laid bare as all manner of artist admits what has been central to the musical story: I am not okay and that is okay.

Encouraging of the need to check in with oneself, to forge friendship and connection, live authentically, and to, as Müller says, “let go of the armour, drop the mask and then move through,” ‘Guts & Glory’ was on for one splendid afternoon only – a treat of bare-boned, character-driven musical theatre.

“We just want to do what we love and make people feel, and that’s what theatre does so well. It just slaps you into submission. It slapped me into my bed, I’m still here,” says Ehlers a day after the emotionally demanding show.

“I put my life on hold today. I can start again tomorrow,” she says.

“The mountain will still be on fire, but hopefully, together, we can put it out.”