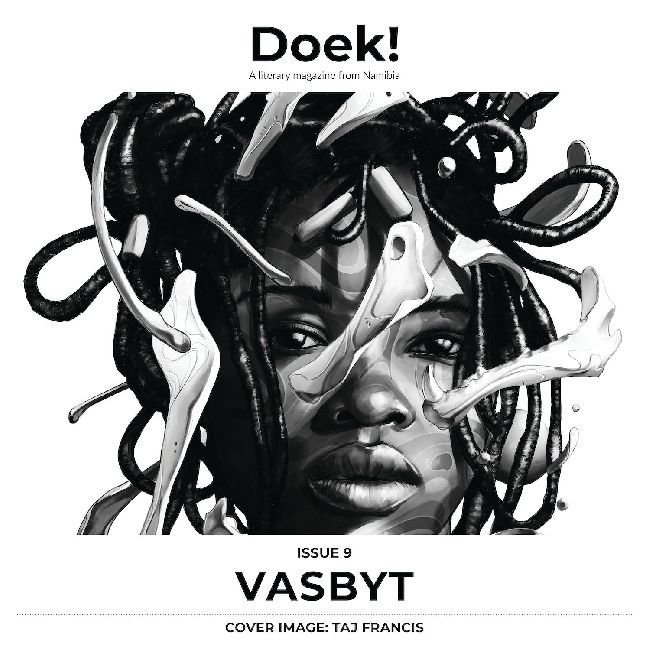 IN 2019, Doek! Literary Magazine burst onto the scene in a show of short stories, poetry, creative non-fiction and visual art.

Four years later, as the online publication seeks submissions for its tenth issue,founder Rémy Ngamije reflects on the last few years with wonder and optimism. “Four years already? How that time seems to have flown. I, personally, am motivated by the prospect of meeting and connecting with new writers, and, in so doing, encountering new stories and the voices that tell them,” says Ngamije.“Doek! is about providing a space for storytellers to share their art and craft. As long as the possibility exists to read more and learn more through the process, there is always a reason to continue what weat Doek are doing.”What Doek, an independent arts organisation, has been doing is tending to the ground in which tonurture Namibian writers. From the flagship Doek! Literary Magazine, the inaugural Bank Windhoek Doek Literary Awards and the Doek Collective to last year’s Doek Literary Festival and the upcoming anthology, the arts organisation is at the vanguard of Namibia’s nascent literary scene.“There really are some excellent storytellers in the country, all they lack is the institutional support that will help their work to be recognised further afield,” says Ngamije. “Doek is only one platform;more effort is needed on a national level to make Namibian storytelling truly recognisable in Africa and the rest of the world.”As Doek! Literary Magazine draws towards the end of its submission period which closes on 1February, Ngamije encourages more non-fiction and visual art submissions.“Essays that question some aspect of the world and do their best to find answers on the page. We receive plenty of memoir-like pieces of writing dealing with trauma of some kind, but unless they are doing something novel with the form or the language, those generally do not spark our interest,” says Ngamije.“This is not to say that we do not enjoy reading them – we do – but when it comes to publishing we avoid rehashing the same topics over and over,” Ngamije says.“We would also like to see more illustrations and photography submissions. I know there are many visual artists in the country, and I would like to encourage as many of them to submit their work for consideration,” he says.Regarding what makes a good story, Ngamije who was the winner of the 2021 Commonwealth Short Story Prize (Africa) and a current judge for the 2023 prize, offers some advice.“I think a good story comes with a good voice and some excellent pacing. It has language thatimmerses you in the story of the world and that allows the characters in the story to be autonomous and independent from the author,” Ngamije says.“Mostly, though, I think a good story offers the reader something – entertainment, a good laugh or a good cry, some sort of wisdom, or a fair trade for passing a day or two reading the work. There are many barometers for judging what makes for a good story; for me it is simple: is it a story that, after reading, I want to tell someone about.”Once the composition is done, for writers eager to submit to the platform, Ngamije advises tho rough editing. “Editing should be strict and try to get the utmost best from the language and ensure that the final submission is the best version of itself. Editing, I think, is where most submissions that do not get into the magazine fall short; the submittants do not take enough time to look over their work,” says Ngamije.“Write to your heart’s content; and then edit to the industry’s demands.” Read previous issues and find submission guidelines at doeklitmag.com–[email protected]; Martha Mukaiwa on Twitter and Instagram; martha mukaiwa.com