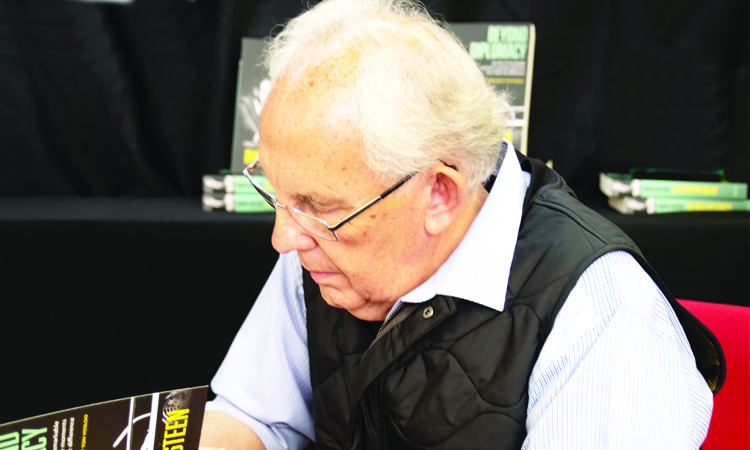 FORMER South African diplomat Riaan Eksteen, who was intimately involved in international diplomacy around Namibia’s independence struggle, has launched his memoir, ‘Beyond Diplomacy’, in which he contextualises his experiences in details never documented before.

Eksteen, who now lives with his wife at Swakopmund, had a diplomatic service career that started in 1964, back when Hendrik Verwoerd was prime minister. During his career, he served as a diplomat under successive South African leaders – prime ministers John Vorster and PW Botha, and presidents FW de Klerk and Nelson Mandela – and also headed the South African Broadcasting Corporation (SABC) as its director general for five years during the politically turbulent 1980s.

“I pursued five different careers and I wanted to put every one of them into perspective, especially my involvement in the diplomatic service of South Africa that stretches over a period of 27 years,” Eksteen said in an interview with The Namibian last week, adding that many of those years he dealt with the “Namibian question at close range”.

He said ‘Beyond Diplomacy’ gave him a platform to describe events that have never been divulged before.

“It was high time to do it, and to inform the public so that they can also form a better opinion of the events that led to certain decisions, and also the context in which all these events that I participated in, happened,” he noted.

It took Eksteen 10 months, from January to October 2021, to write the book.

Eksteen said he set his mind to finishing the task, writing night and day, and that the book was already constructed in his mind over a long period.

Besides having a scrapbook of hundreds of notes, newspaper clips, photos and cartoons that involved him, he said he also has an excellent memory, which all aided his writing.

Eksteen was quick to say that parts of the memoir relating to Namibia were his favourite. He and his wife have since 2012 been living at Swakopmund, which according to him, is the “most uncomplicated place” he has ever lived in.

During his career, he was South Africa’s ambassador at the United Nations during the time that the UN Security Council adopted its resolution 435 and called for the withdrawal of South African forces from Namibia, and for the transfer of power to the people of Namibia – which ultimately led to Namibia’s independence.

After his posting to Namibia, he became South Africa’s ambassador to the UN in Geneva, and thereafter the country’s ambassador in Turkey and central Asian countries that had previously been part of the Soviet Union.

“The issue of Namibia was very close to my heart. I dealt with Namibia at close range and I knew the issues quite well,” he recounted, adding that he and former political opponents, especially in the ranks of Swapo, became close and enduring friends.

Eksteen said he puts a “very high premium on networking and friendships”, so much so that National Assembly speaker Peter Katjavivi noted as a comment in ‘Beyond Diplomacy’ that Eksteen has shown it is possible to draw lessons from experiences, opportunities from challenges, and build friendships with former political opponents.

“That is the main highlight of my involvement with Namibia,” Eksteen said.

He said that while Namibia started with many challenges as a newly independent state three decades ago, it overcame many of those challenges.

“There are different challenges at different stages of one’s life as one grows older – so it is with Namibia. There are new challenges for Namibia, but I am confident in the determination and leadership available that this country can play a definitive role in international affairs,” according to Eksteen. “Namibia is a vibrant country and has a vibrant history and there’s a vibrant and a good future that cannot be neglected.”

Opposition MPs walk out of parliament over remarks by Nekundi