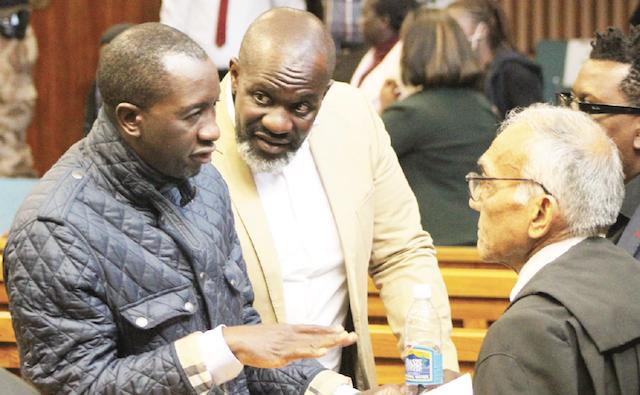 HIGH Court judge Shafimana Ueitele’s decision to dismiss the bail application of six of the men charged in the Fishrot fishing quotas fraud and corruption case was wrong, lawyers representing the six accused argued in the Supreme Court yesterday.

This was the thrust of arguments by senior counsel Vas Soni and fellow lawyer Thabang Phatela during the hearing of an appeal by the six accused against Ueitele’s dismissal of their application for bail in April last year.

The hearing before acting judges of appeal Theo Frank, Jeremiah Shongwe and Kananelo Mosito ended with the court reserving judgement and Frank informing the appellants and the state that they would be notified once the court’s decision is ready.

Ueitele dismissed the bail applications of former justice minister Sacky Shanghala, his business partner James Hatuikulipi, former National Fishing Corporation of Namibia chief executive Mike Nghipunya, Pius Mwatelulo, Otneel Shuudifonya and Phillipus Mwapopi after concluding it would not be in the interests of justice to grant them bail.

Having noted that the state was alleging the men had tried to interfere with the investigation of their case and with witnesses in the matter, and that four of them were also charged with obstructing the course of justice, Ueitele said in his view the administration of justice would be prejudiced if the six accused were to be granted bail.

Soni, who is representing Shanghala, Hatuikulipi and Mwatelulo, argued during the appeal hearing that Ueitele was wrong in stating that the six applicants had the onus to show it would be in the interest of justice for them to be released on bail.

It is the state that has the burden of showing the continued pretrial detention of an accused person would be justified, Soni said.

He also argued that Ueitele did not balance the rights of the six accused and the interests of justice and of the public in his judgement, and that his approach in considering the application to be granted bail was irregular.

Soni and Phatela both argued that Ueitele’s judgement was wrong and that the Supreme Court should replace it with a decision granting the six appellants bail.

Phatela – representing Nghipunya, Shuudifonya and Mwapopi – also argued that the facts placed before the court during the bail hearing before Ueitele did not justify his conclusion that it would not be in the interests of justice to grant them bail.

It is also not in the public interest that simply because someone was charged with corruption they should not be granted bail, Phatela argued.

He further argued that in Mwapopi’s case especially – the state has not alleged that he tried to interfere with witnesses or evidence in the matter – there was no clear reason why Ueitele turned down his application to be granted bail.

On behalf of the state, deputy prosecutor general Cliff Lutibezi argued that in a bail application the onus is on an accused person to show they should be granted bail, and not on the state to show that bail should be refused.

He said there was evidence before Ueitele that Hatuikulipi and Shanghala were both found in possession of cellphones while in custody, while prison rules do not allow detainees to have cellphones with them, and argued that this showed they could not be trusted to comply with bail conditions if they were to be released.

Because there is also a fear that they would interfere with witnesses or evidence in the case if they were released on bail, it is not in the interests of justice for them to be granted bail, Lutibezi argued as well.

Considering that the Fishrot accused are alleged to have benefited from national resources in the form of Namibian fishing quotas that were supposed to have been used for governmental objectives, it would also not be in the public interest to release the six accused on bail, Lutibezi added.