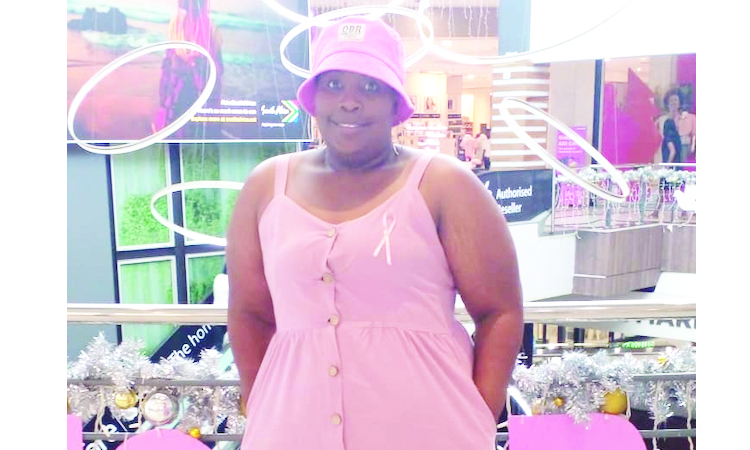 PAMELA Karimbue from Windhoek says she battled breast cancer for four years and is now grateful breast cancer survivor due to her support system.

“My mom, aunt and sister were very instrumental to my recovery and that was my motivation to fight for life. What kept me going to fight were my kids and my support system,” she says.

Karimbue was diagnosed with stage 4 breast cancer in January 2018. Two days after the diagnosis she started her chemotherapy treatment for months and eventually had a double mastectomy.

“Being on chemo was horrible for me, the side effects had the best of me, but I fought through it. Besides the side effects, I also struggled with loosing hair and my breast in the process,” says the mother of four.

The 37-year-old Karimbue adds that she was broken emotionally and physically, but later found courage and trained her mindset positively.

She says in 2020 she was re-diagnosed with skeletal cancer, which was detected in her right leg, skull and lower spine and went back on treatment. “After all that, here I’m in 2022,” she says, with a broad smile on her face.

Apart from her support system, she says, her faith in God, constant prayers and being positive were key.

“I struggled emotionally, but thinking of what will happen to my children gave me that kick and since then, I fed my mind, body, and soul with positivity.

“I’m in remission now and that feels great, but you can never let your guard down. I still do regular monthly check- ups and receive treatment to keep the tumours in check,” she added.

She wants women going through the same situation to know and understand that having the right support system and creating space for positive energy can beat cancer.

“A lot may change after your diagnosis, but live your life as if you never heard of cancer. Don’t let it consume your being, but let it be known that you are not going down without a fight,” says Karimbue.

Karimbue recalls her first experience and encounter with cancer in 2005, when her aunt had beaten breast cancer and that same year it had returned and had spread to other parts of her body.

“My aunt and grandmother were staying with us while she was getting treated, unfortunately a few months later she died,” says Karimbue, adding that her mother was once diagnosed with liver cancer, however, she was declared cancer-free in 2002.

“We also need to educate men on what breast cancer is and how to support women, because many women who had a mastectomy are stigmatised,” she says.

ANYONE CAN GET CANCER

Dr Lisoma Chatty says breast cancer can occur at any age even though most of the cases are found in older women.

One of the causes of cancer is excessive cell growth.

She said when chemicals that control growth in the body fail, people end up having cancer.

That cell growth can become a lump or an ulcer and can take over the whole organ or system and spread to other areas.

n Change in the size, shape or appearance of a breast

n Changes to the skin over the breast, such as dimpling

n Peeling, scaling, crusting or flaking of the pigmented area of skin surrounding the nipple (areola) or breast skin

n Redness or pitting of the skin over your breast, like the skin of an orange

When to see a doctor

If you find a lump or other change in your breast — even if a recent mammogram was normal — visit your doctor for prompt evaluation.

‘Rise up against poverty and inequality’