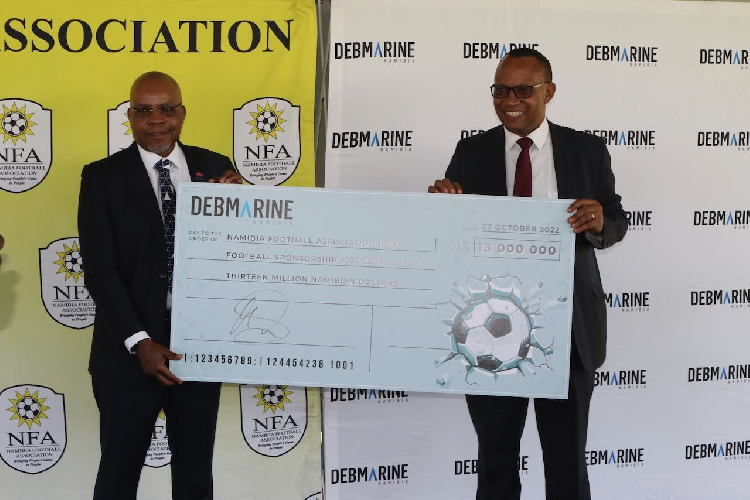 In a press release issued jointly with Debmarine Namibia it said that the bulk of the sponsorship will go towards uplifting the clubs. A total of N$8 000 000 will be allocated as start-up grants for the clubs, while the cash prize money for the premier league amounts to N$2 580 000.

“The remaining funds will be used to support operational costs i.e. stadium, referees, medical, security, marketing and so forth,” it added.

“For us through this sponsorship agreement with the NFA, it is one of our fundamental conditions that respect for the game be upheld, with the hope this sponsorship will bring all the associations’ football clubs together and unite everyone who has a love for the game,” Otto Shikongo, CEO of Debmarine Namibia said.

Bisey /Uirab chairperson of the Fifa normalisation committee of the NFA said that the unbearable silence of no official football, under the vanguard of the NFA, became a pressure-cooker for the entire value-chain of the football economy.

He mentioned that the SMEs selling food and beverages, generating revenue from consumer spending at football stadia were severely affected.

“Reliable monthly wages of players, petrol stations benefitting from fuel cost by football people and the procurement of football equipment like balls, boots, playing gear etc. all stopped as football politics and leadership squabbles were the main root causes of the impasse,” he said.

“We are totally uncompromising when it comes to good governance and financial controls – these aspects are not optional when you are dealing with resources that belong to the people.”

Shikongo appealed to the NFA to execute the agreement in a manner that ensures that the highest standards of discipline and accountability are maintained.