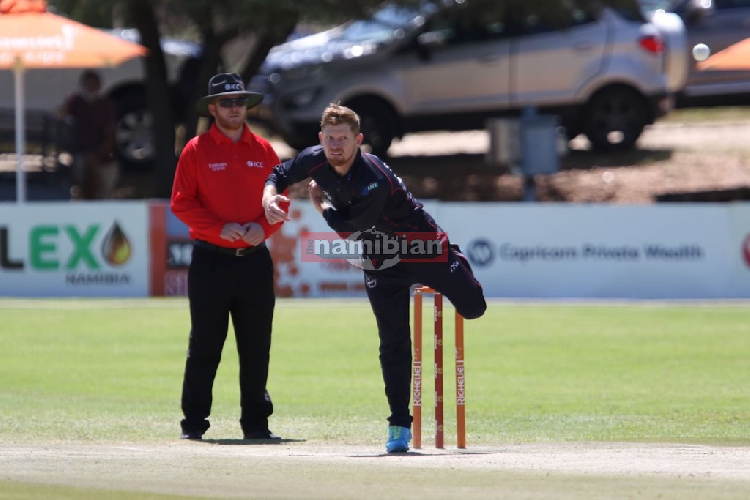 NATIONAL cricket coach Pierre de Bruyn has called for an improvement of at least 20 percent following their 79-run victory against the USA at Port Moresby on Wednesday.

Namibia got their Papua New Guinea tour off to a winning start after scoring 176 and then dismissing the USA for 97, but De Bruyn said the team’s performance was below par.

“I think we operated at 70 percent in the batting and bowling units, we didn’t bowl as well as I know our bowling unit can bowl. But it’s a positive, it’s not a negative, because we still beat a very good side. We need to be better on Saturday, we need to improve by about 15 to 20 percent, but it’s a good start to the series and we are going to take a lot of positives and momentum with us,” he said.

Namibia plays the USA again tomorrow, while they also face PNG twice, on 19 and 21 September.

On Wednesday, Namibia lost Lohan Louwrens early for 5, but Divan La Cock (48 off 66 balls, 4×4, 1×6) and Stephan Baard (25), stabilised the innings, before USA struck with two wickets in quick succession (Michael van Lingen for 8 and Nicol Loftie-Eaton for 1) to limit Namibia to 101/5 after 26 overs.

Gerhard Erasmus (27), Jan Frylinck (22), revived the innings, while further down the order Ruben Trumpelmann added 16 and Bernard Scholtz 17 not out, before the whole team was out for 176.

The USA lost two early wickets, but Aaron Junes and Steven Taylor put on 38 for the third wicket, before Bernard Scholtz struck with two wickets.

Jones went on to score 45, but Scholtz, Jan Frylinck and Loftie-Eaton kept the pressure up with regular wickets to dismiss USA for 97.

De Bruyn said the pitch was very difficult to bat on while some contentious umpiring decisions also went against them.

“Winning the toss was critical, which we did, and we managed to get to that total of 175, but in the back of our minds we knew its possibly about 20 or 30 runs too short. I also feel we got two very rough decisions from the umpires – Nicol Loftie-Eaton and Ruben Trumpelmann’s decisions were appalling to say the least and that just broke the momentum,” he said.

“It was almost a T20 wicket, but a very tough wicket to bat on – a lot of turn, no bounce at all, very low, and if you bowl well on that, it’s very tough to score, and especially to accelerate, that was the tough part,” he added.

“We relied on our bowlers and our fielding unit to put up a good fight in a very tough scrap. USA lost a couple of wickets up front but they had a good start, in the power play especially, and they’ve got very good batters who can just control the game. But there was just that phase when Bernard Scholtz took charge by creating pressure and that’s where we got wickets and the rest of the bowlers could jump on that momentum which was crucial and at the end of the day we bowled them out for 90-odd. But that wicket wasn’t that bad, it’s just a reflection of how well we bowled at stages and how we capitalised on the momentum,” he said.

The win sees Namibia remaining in fifth place on the log, on 20 points from 19 matches, but with a lot of matches in hand on the front-runners.