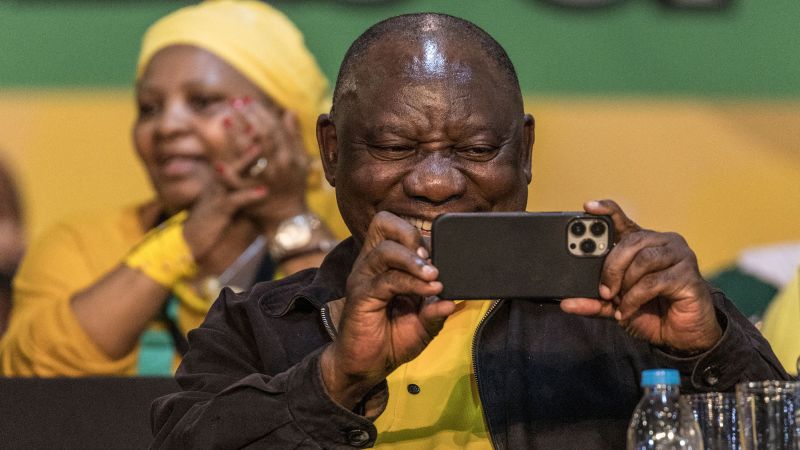 South African President Cyril Ramaphosa has been re-elected leader of the governing African National Congress (ANC) in a party leadership contest, the ANC said on Monday.

The announcement comes at the end of the ANC National Elective Conference, which started Friday.

Last week, Ramaphosa survived a move to start impeachment proceedings against him in a vote in parliament.

The ANC parliamentary caucus largely voted last week to block an investigation into an ongoing scandal, after initial evidence found Ramaphosa could have violated his oath of office.

The findings related to the theft of more than $500,000 in cash from the South African leader’s private game farm in 2020. The cash was stuffed inside a leather sofa, according to the panel investigation.

The panel, led by a former chief justice, found that the crime was not reported to the police and that there was a “deliberate decision to keep the investigation secret.”

After initial speculation that he would resign, Ramaphosa’s lawyers sought to challenge the panel’s findings in court. The president has repeatedly denied the allegations, saying the money was from the sale of wildlife at his Phala Phala farm.

Ramaphosa was first confirmed as South African’s president in 2018 after his predecessor, a scandal-plagued Jacob Zuma, was effectively pushed out of office by his own party.

He made his name as a trade union leader during the apartheid era and as the chief negotiator for Nelson Mandela, helping to guide South Africa out of white minority rule in the 1990s.

Mandela made it clear he wanted Ramaphosa to replace him after his presidency ended. But Ramaphosa lost the race to helm the ANC – and the country – to Thabo Mbeki, another anti-apartheid leader who came back to South Africa after living in exile.

Ramaphosa left government afterward and made his fortune in the business world.